The Aquaman and Friends Action Hour 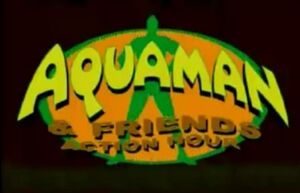 The Aquaman & Friends Action Hour aired on Cartoon Network in Latin America in 2003 and was produced by Wild Hare Studios of Atlanta, GA. The show, which lasted 7 episodes, was a parody of Aquaman's appearances on the Super Friends animated series. In this series, Aquaman is now the host of a children's television series. He is being pursued by the Legion of Doom, who had spent their entire operating budget on attempts to conquer the world and now have to rent out parts of the Hall of Doom as apartments to generate income. Aquaman was chosen as the lead character in this parody series because the producers were not allowed to use the full cast of the Super Friends due to Justice League airing in the United States, AND because of Aquaman's negative reception in the eyes of the public thanks to Super Friends. The series is separate from the Cartoon Network commercials that aired in the United States that featured Aquaman and Wonder Woman being saved from the Legion of Doom by The Powerpuff Girls and the Aquaman Dance Party commercials that aired during Adult Swim. Also aired on Tooncast since 2008.

Retrieved from "https://superfriends.fandom.com/wiki/The_Aquaman_%26_Friends_Action_Hour?oldid=85260"
Community content is available under CC-BY-SA unless otherwise noted.