SuperFriends Wiki
Register
Don't have an account?
Sign In
Advertisement
in: Shorts, The New Adventures of Superman episodes

The Ape Army of the Amazon

View source
A Filmation Series:
The New Adventures of Superman

The Ape Army of the Amazon 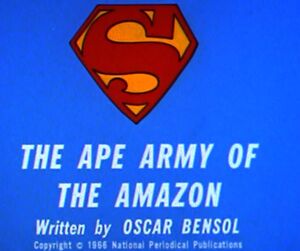 In a South American jungle, on a plateau high above the Amazon River, a large army of apes fall into military formation for two evil men, Colonel Vasta, an ex-officer exiled by his country for treason, and Doctor Rukus, a discredited scientist, who controls the apes by the tone of a supersonic transmitter on his back. Vasta asks Rukus where the scouting patrol is, because they should have been back a long time ago. Rukus then tells him he will ask Simbu, and he begins beating on a drum, and the gorilla understands the music, and begins beating on his chest rhythmically, and Rukus interprets him as saying that one patrol is approaching now.

At that moment, Clark Kent and Lois Lane are piloting a small private plane over the Amazonian Jungle, heading toward a site where archeologists were having an excavation, when suddenly, the plane has engine trouble, so Clark sets the plane down in the river. Clark tells Lois to stay in the plane and he ties it to a tree and tells her he saw a village not far away, and he sneaks off and changes into Superman, and suddenly his super hearing detects the sound of the supersonic transmitter, he then follows it by taking to flight.

Superman then approaches the village, and sees a man being attacked by apes in the bell tower of a Church. Superman saves him, and the man thanks him in his native tongue of Spanish. He asks him what happened and the man told him that an army of apes attacked the village, and everyone escaped in fishing boats except him. At this point, Superman realizes that he made a big mistake, he left Lois all alone when there's an army of apes running around. He takes off back toward the river where she is...

Meanwhile, a bunch of apes are trying to get inside the plane and attack Lois. Superman instantly arrives and starts knocking the apes around, tossing them and punching them, driving them away. Lois then tells Superman she's worried Clark may have been killed by the apes, but Superman assures her that he's probably okay. He then lifts her to pick her up and take her to the excavation site. After they arrive, they see that the archeologists are no where in sight, and that they deserted the place. They find that someone had written on the wall about the apes, and warned people to beware.

Back on the plateau, Simbu communicates to Rukus that the archeologists are gone, because they were scared away. The colonel is pleased, because now the gold in the temple is all theirs. Rukus tells the Colonel to wait here with a squadron of apes, while he approaches the temple to get the gold, but the colonel draws his gun and tells him he can stay and he will go get the gold. But the doctor plays the drums to make the apes attack him, and Simbu punches the gun out of his hand. The man takes off running as fast as he can, but he reaches a cliff on the plateau, and the apes push him over the edge. But Superman sees him and catches him. Superman recognizes him, and he calls out his name and refers to him as a "traitor." But Vasta tells him: "Not me Superhombre." He then goes on to tell him that Rukus is the real traitor, because he controls the apes with his supersonic transmitter.

Back at the temple, Lois is no longer safe, because the apes and Rukus arrive, and grab her, and tie her to a pillar. Rukus finds the gold, which was hidden under an ancient stone idol. He presses one of the idol's toes, which is a lever, which causes the idol to move backward, uncovering the gold in a chamber below but at the same time, it's about to smash Lois, who's tied to the pillar. Superman quickly arrives, taking out the apes standing guard outside the temple and then entering, and Rukus tells Simbu to attack him. Superman tosses the ape through a stone wall, and stops the idol from smashing Lois, then he grabs Rukus from the gold chamber.

Outside the temple, Superman shows Lois just what it was that made the apes act all crazy, and he smashes the supersonic transmitter and the apes all scatter. He tells Lois to wait there for Clark, and he then turns Vasta and Rukus into the local authorities. Later, Clark arrives and finds Lois, and she was wondering where he was and he pretended to wonder where she was as well. He asks her and she tells him he'd never guess. He then tells her that he's not sure, but he thinks that there must have been some kind of "Monkey business" going on.

The title refers to the army of apes in the Amazon Rainforest.