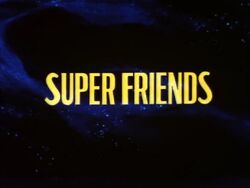 This was the first episode of season 2 of the televised adventures of the Super Friends, and the seventeenth episode overall. This season of Super Friends introduced a brand new format to the show that was generally considered far more exciting than the previous season.

While still an hour in length, the hour-long episodes were broken up into several segments, featuring a variety of mini-episodes; which featured many new guest superheroes such as Samurai and Apache Chief;[1] and half-hour long episodes as well as safety tips, health tips, magic tricks and decoders.

The first episode of The All-New Super Friends Hour aired on September 10, 1977 on ABC, and it had by far the highest ratings of any previous episode from season 1. The introduction of the Wonder Twins and Gleek was also preferred over Marvin, Wendy and Wonder Dog, as the new super powered characters were given far more praise as the new Jr. Superfriends. In fact, Zan and Jayna both appeared in solo stories without the other heroes in their own mini-episodes. Also, impornate to note, is that the Hall of Justice was often referred to as the 'Justice League of America Headquarters', even though the SuperFriends Comic Book had already established the Hall as the Earth-base for training young heroes.[2]

Although this season of the show wasn't nearly as popular as the next one, for its' time, the show was considered groundbreaking, as it introduced far more people to DC Comics characters than its' predecessor did.

This season also caused a positive increase in sells for the line of already popular action figures which was called The World's Greatest Super-Heroes!. The show helped to sell toys for Mego, and Mego in turn also helped keep the Superfriends popular for Hanna-Barbera as well.

(1a) The Brain Machine

A scientist uses a machine he developed to speed up his evolution and becomes a man of the future, complete with telekinetic and telepathic powers, and intends to do the same to everyone else on Earth. Batman,Robin, and Wonder Woman try to stop him, but things become complicated when he exposes Wonder Woman to his device.

Aquaman teaches a young boy that it's dangerous to swim alone without a buddy, when the boy almost drowns because he gets his feet tangled in seaweed.

A careless teenager and his friend steal a plane for a joy ride...without knowing that the engine's MALFUNCTIONING! The Wonder Twins must come to their rescue.

Superman gives the first clue to the secret code word. He forms a "bed" from a cloud.

(1c) Invasion of the Earthors

An undergorund civilization needs bedrock to survive and unwittingly endanger our world to get some.

During Invasion of the Earthors, Superman gives the final part of the code word. He flies down into a cave and pulls out a giant rock, and throws it on the ground.

After Invasion of the Earthors, Superman reveals the code word, and he recaps the last two clues, and the answer to the code was "Bedrock."

At the Superfriends Magic Theater, Wonder Woman demonstrates a magic trick. The Magic trick is called The Glass and Coin Mystery. And she uses a drinking glass to make the coin disappear. She then puts a magic paper over the glass, and then puts the glass over the coin. Then she chants, "Here and there, there and here, the coin will now disappear." Upon lifting the glass, the coin vanishes. She tells the audience she'll return to tell everyone where the coin went.

Aquaman and Black Vulcan must stop an arrogant sea captain from killing his crew by attempting to get past a whirlpool just to set the speed record for reaching Norway.

Batman and Robin are driving around in the Batmobile in the country, and they come to Mr. Brown's farm, where they purchase some fruits and vegetables.

Retrieved from "https://superfriends.fandom.com/wiki/The_All_New_Super_Friends_Hour_(Episode_1)?oldid=89763"
Community content is available under CC-BY-SA unless otherwise noted.