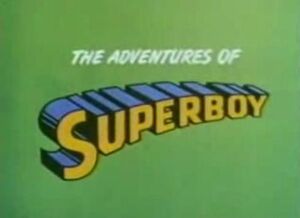 The Adventures of Superboy was a series of six-minute animated Superboy cartoons produced by Filmation that were broadcast on CBS between 1966 and 1969, that ran for three seasons. It was based on the popular Superboy comics created by Jerry Siegel and Joe Shuster.

The 34 segments appeared as part of three different programs during that time, packaged with similar shorts featuring The New Adventures of Superman other DC Comics superheroes.

These adventures marked the animation debut of Superboy, as well as his teenage alter ego Clark Kent, who acted as the bespectacled, mild-mannered disguise for the young hero. Krypto the super-powered dog would accompany his master on every dangerous mission. Other characters were featured, such as Lana Lang, the foster parents of the Boy of Steel; Pa and Ma Kent. The town of Smallville also made its animated debut.

As a result of the production's budget, the show featured a great amount of stock animation as well as limited movement from the characters.

The first season of the series premiered on September 10, 1966 and ran from 1966 to 1967 under the title The New Adventures of Superman. This format featured two six minute Superman cartoons with one six minute Superboy cartoon played between them. Thirty-six Superman shorts and eighteen Superboy shorts were produced for this season.

In the second season (1967-1968), eight new episodes of The Adventures of Superboy ran as part of The Superman/Aquaman Hour of Adventure.

The series premiered on September 10, 1966 as part of a 30-minute program named The New Adventures of Superman, featuring two Superman shorts with one Superboy segment in between.

The Superman/Aquaman Hour of Adventure was first broadcast on September 9, 1967. This 60-minute program included new Superboy and Superman segments, and adventures featuring Aquaman and his sidekick Aqualad. It also comprised a rotating series of 'guest star' cartoons featuring the Atom, the Flash and Kid Flash, the Green Lantern, Hawkman and the Teen Titans (Speedy, Kid Flash, Wonder Girl and Aqualad).

The Batman/Superman Hour premiered on September 14, 1968, featuring Superboy and Superman shorts alongside the adventures of Batman, Robin and Batgirl.

In 1985, Warner Home Video released eight selected episodes of the series on VHS in the "Super Powers" video collection along with Aquaman, Batman, and Superman. These videos were re-released in 1996 and are out of print.

Although the first 36 segments of The New Adventures of Superman have been released on a 2-disc DVD set, it does not include the Superboy shorts because of an ongoing legal battle between Warner Bros. and the estate of Jerry Siegel over the rights to the "Superboy" name.

Retrieved from "https://superfriends.fandom.com/wiki/The_Adventures_of_Superboy?oldid=26810"
Community content is available under CC-BY-SA unless otherwise noted.