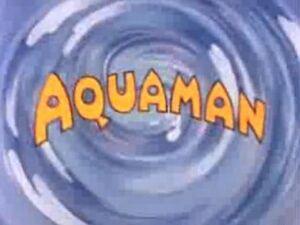 Aquaman is a Filmation animated series that premiered on CBS on September 9, 1967. It was originally produced as a twelve-minute segment (2 episodes)[?] of the Superman/Aquaman Hour of Adventure series. The series featured the adventures of Aquaman and his teen-sidekick Aqualad, as they sought to protect the undersea city of Atlantis from a gallery of foes including Black Manta, the Fisherman, Nepto, Torpedo Man, Captain Cuda and Mirror Man. Aquaman and Aqualad (frequently referred to as "Tadpole") rode atop giant sea horses named Storm and Imp. Even Aquaman's wife Mera kept a sea horse. Rounding out the cast was a fun-loving walrus named Tusky, who possessed the ability to travel to the deepest depths of the ocean, despite the fact that he was a mammal. Tusky was sometimes accompanied by Topo, an octopus.

The show was also composed of other special shorts as well featuring, special segments of individual characters, including the Atom the Flash and Kid Flash, the Green Lantern and Hawkman. The Justice League of America was also featured in its own shorts (Atom, Flash, Green Lantern, Hawkman and Superman) and so were the Teen Titans (Speedy, Kid Flash, Wonder Girl and Aqualad) were also featured in team adventures.

In September of 1968, at the end of the first season; Filmation repackaged the Aquaman vignettes, as part of its own eponymous animated feature, without the Superman and Superboy segments and expanded it to a 30-minute segment. It ran until June, 1970.

Thirty-six Aquaman segments were produced (have chosen to list two episodes a week):[1]

Retrieved from "https://superfriends.fandom.com/wiki/The_Adventures_of_Aquaman?oldid=93897"
Community content is available under CC-BY-SA unless otherwise noted.