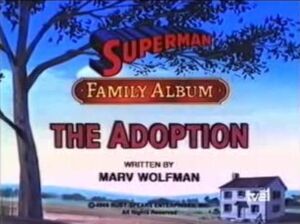 Jonathan and Martha Kent, who had just discovered baby Kal-El, decides to take the child to an orphanage. But things go crazy, when day after day, the director and his assistant have couples continuously come in to see the child but they decide they do not want to adopt him, because his superpowers cause too much disaster! At one point he flies off to the zoo and brings back a full grown lion. This freaks the couples out, and they decide there's no way they're going to adopt such a trouble making child.

Late one night, Kal-El gets lonely and decides to fly out the window to the Kent's house and through their window and into there bed in between them. When morning comes, Martha awakens to find young Kal-El sleeping. She wakes Jonathan, who finally decides that they'll call up the orphanage to convince them that they will adopt him themselves.

Retrieved from "https://superfriends.fandom.com/wiki/The_Adoption?oldid=54578"
Community content is available under CC-BY-SA unless otherwise noted.