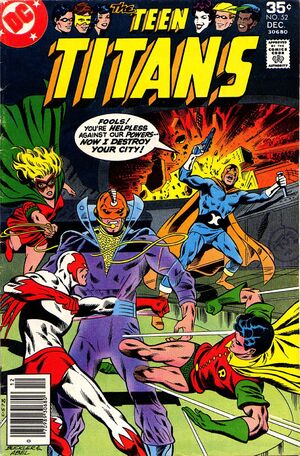 Part Three of a Three-Part Story.

In the parallel universe of Earth-One, In the Titans Long Island restaurant headquarters, hot- headed Speedy (aka Wally West), confronts Lilith Clay head on, caller her their former resident witch! This of course, angers Gnarrk who is ready and able to defend his lovely Lilith. As he threatens Speedy, Speedy sucker punches him. The Titians choose sides and go at it. Wonder Girl binds both teams in her magic lasso, and orders them to stand down. While under the Lasso’s control, Lilith reveals that through ‘self-hypnosis’ she learned that a criminal known as Mister Esper has tapped into her psychic powers, and used them to create the disasters. She goes on to tell them that once she was able to see that her powers had been tapped, she was able to track him down. And that he was right here in Long Island! That is why the Teen Titans West have come to New York. They needed help! Wonder Girl then deduce that the real cause is not Captain Calamity, but Mister Esper. She proposes splitting into two teams – One to track down Mister Esper, the other to keep Long Island from sailing out to sea.

Aqualad reluctantly heads a team consisting of Golden Eagle, Beast Boy, Dove, Kid Flash and Bumblebee to the ocean. Lilith heads up the team to track down Mister Espers, which includes Wonder Girl, Speedy, the Guardian, Hawk and Gnarrk. Robin, still believes that Captain Calamity is the true culprit behind their troubles. So he takes a third team consisting of Harlequin and Bat-Girl (his old crush) to investigate his possible connection. As they race away from Gabriel's Horn, Beast Boy blurts out that the last team back buys everyone dinner.

Unbeknownst to the Titans, Mister Esper has been telepathically eavesdropping on them and even worse, whisper them into a full fledged brawl. Now in his confidence, he believes he has control of the two teams. Aqualad summons a pod of whales to push Long Island back into place. Beast Boy transforms into a whale, to assist. Golden Eagle, and the Bumblebee, guide Aqualad from the air. While Mister Epser looks on a laughs at their supposed futile efforts, the Titan group led by Lilith appears and surprises Mister Esper in his lair. Mister Esper instantly seizes control of their minds, and forces them to battle one another. At the same time, Mister Esper is able to psychically resist Aqualad's efforts to move Long Island. Also at this time, Robin, Bat-Girl, and the Harlequin arrive at the Nassau County Jail only to discover that Captain Calamity has escaped from prison.

Wonder Girl, realizing that Lilith is the source of Mister Esper's powers, throws Gnarrk into Lilith, knocking her unconscious. The Titans immediately regain control of their own minds. Aqualad no longer encounters any resistance in moving Long Island, back to where it belongs. As the Titans move in to capture Mister Esperhe fades away from sight. Robin calls his fellow Titans and informs the Teen Titans of Captain Calamity's escape but promises to track him down.

Robin does just that, with Bat-Girl, and the Harlequin at his side they engage him at the Throg's Neck Bridge. After a few harrowing moments, Captain Calamity is defeated. Captain Calamity is revealed to indeed be Mister Esper and his plan to make Long Island his personal kingdom is now at an end.

With the villain turned over to the proper authorities, for incarceration, Robin takes both teams out for pizza at Cosmos. Robin explains that Captain Calamity was a psychic projection of Mister Esper. So while it appeared that he was on the west coast, he was really in NY. This also means that after he was arrested, all Mister Esper did was turn him off making it seem like he disappeared. Robin ends his explanation by telling them that he had hired Aaron Jarit, a photographer to record the momentous meeting of the Teen Titans and the Teen Titans West.

This concludes our Teen Titans caper!

Retrieved from "https://superfriends.fandom.com/wiki/Teen_Titans_Vol._1_52?oldid=82155"
Community content is available under CC-BY-SA unless otherwise noted.