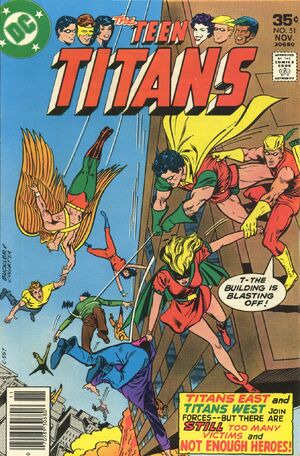 Part Two of a Three-Part Story.

Titans East! Titans West! And Never (?) the Teens Shall Meet!

In the parallel universe of Earth-One, our story picks up with our West Coast Heroes gathered together in a public eatery. Bat-Girl, Beast Boy, Golden Eagle, Lilith Clay, the Hawk, and the Dove meet to discuss their current case. All are in their superhero guise except Lilith, making a public spectacle for sure. Lilith is still convinced that the meeting of one another was no coincidence. She also relays back to them how she foresaw other disasters, like a train derailing. But since they didn’t see it themselves they right it off as a false alarm. Now she is seeing a skyscraper take off like a rocket, right there in Coast City. Finding Lilith's premonitions too fantastical, Beast Boy, and the Hawk, bail on the meeting. Unbeknownst to the newly formed team, they are being telepathically eavesdropped on by Mister Esper. Mister Esper has tapped into Lilith's psychic powers (from an apartment not far away). It is unclear at this point, but it appears that Mister Esper is able to use his ‘Super-Sonic Whisper’ to order Lilith to subconsciously create these disasters. What is clear is that each time he does this, the more mastery he gains over her powers. He blissfully goes over his achievement, awaiting his grand finale. In the meantime, he’s content to pull up a ringside seat to watch his latest disaster unfold.

As Beast Boy and Hawk soar high above the city, back towards the Aircraft Carrier U.S.S. Tippecanoe, where Hank (aka Navy seaman) is assigned,[1] they see an amazing sight. The Ferris Building is taking flight! Just as Lilith predicted. Beast Boy transforms into a giant gorilla, and tries to keep the skyscraper on the ground. The rest of the newly formed team rushes in to assist. Despite the fact, that they’ve all just met, they give forth a joint effort that teams of long-standing would be hard pressed to match. Lilith uses her psychic ability to stop the building from blasting off, but the stress causes her to faint from the exertion. Clay's boyfriend, Gnarrk, angrily intervenes, threatening violence against the team, for jeopardizing his girl. As he holds Beast Boy and Hawk over his head by their throats, Lilith calms the situation. Gnark wants to know what she’s doing with these clowns, because they came to California to get away from people like that. As they argue, Roy Gales from KCST-TV arrives to interview them about all the similar events. As he asks them questions, he also informs the, that a train in New York turned into a roller coaster. This means that Lilith’s predictions weren’t false alarms, just 3,000 miles away. The team then decides that it’s time to make a trip to the East coast and check in the ‘other’ Titans.

Now we shift gears and pick up where we left the Teen Titans in the last adventure – in a stalemate with Captain Calamity!

Back in Long Island, our heroes (Robin, Kid Flash, Wonder Girl, Harlequin) are faced with an ultimatum, given by Captain Calamity. He has threatened the deaths of hundreds (and fellow Titans, Bumblebee and the Guardian who are also in the chasm) by collapsing the chasm, if the Teen Titans act against him. Each of the Titans have already worked out an individual strategy against Captain Calamity. And so, in daring show of force, they all act in unison, quickly subduing Captain Calamity, before he can make good on his threat. With Captain Calamity defeated, the Teen Titans easily subdue his minions. The Titans and several ‘first-responders’ help save the people in the plane as well.

The Titans disperse. Donna and Wally head back to Farmindale together on a bus. Donna is telling Wally that she wants to head to the Californian coast with her roommate Sharon. He is concerned by this and in a moment of weakness, he expresses his romantic interest for her.

Unfortunately for West, Troy does not return his affection. Arriving at the Teen Titans headquarters, West and Troy are greeted by Aqualad. As they catch up, the rest of the Teen Titans return to the headquarters. Aqualad tells them that he wasn’t sick. His ailment was psychosomatic. He then states his intention to resign from the team, due to his overwhelming inferiority complex. The Teen Titans plead with Aqualad to reconsider. As they argue, Speedy is watching a news report by reporter Martha Roberts on the mission monitor board. Incredibly, Long Island floating into the sky. With Captain Calamity defeated, the Teen Titans are at a loss to explain this new crisis. Just then, the newly formed Teen Titans West arrive, with Lilith Clay standing forth as leader. She states that she is the cause of the current crisis.

Our story concludes in the next two issues of Teen Titans:

Retrieved from "https://superfriends.fandom.com/wiki/Teen_Titans,_Vol._1_51?oldid=67436"
Community content is available under CC-BY-SA unless otherwise noted.