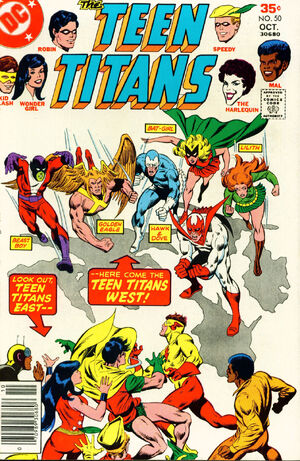 Part One of a Three-Part Story.

In the parallel universe of Earth-One, It’s a beautiful day, as Dick Grayson, Donna Troy, Wally West and Duela Dent return from Hudson University. Donna expresses her desire to check out those Californian Universities that are closer to the ‘Beach Coast’ claiming those are more her speed. As they joke with one another, and Wally laments about how slow they’re going, the train tracks suddenly buckles and bends into towering hills. The four teenagers immediately spring into action as the Teen Titans. Kid Flash evacuates the train. Wonder Girl straightens the tracks back out, then stops the train. Captain Calamity appears, ordering his minions to rob the passengers. Robin, and the Harlequin, subdue Captain Calamity's minions. Captain Calamity, however, proves to be a more formidable foe. Captain Calamity turns the Teen Titans' attacks back at them. Calamity is able to subdue Wonder Girl by causing muscle spasms which prevents her from taking further action. One of his men viciously clubs Wonder Girl into unconsciousness, which upsets Captain Calamity believing there was no need for that.

At that same time, across the continent on board the U.S.S. Tippecanoe, Betty Kane wins an exhibition tennis match, against Christine Connell. As soon as the match is over, the U.S.S. Tippecanoe begins to rise into the air. Meanwhile, at Mammoth Studios, we find Garfield Logan (aka Beast Boy) who is shooting a scene for the TV show, ‘Space Trek, 2022.’ He sees the U.S.S. Tippecanoe, hovering in the sky. Charlie Parker (aka Golden Eagle) also sees the flying aircraft carrier, just after quitting yet another job. Kathy Kane and Navy seaman Hank Hall, investigate the situation as Bat-Girl, and the Hawk. Upon hearing who is this super-heroine is, Hawk is confused stating that the ‘real’ Batgirl is older and has red hair. She quickly explains that she is the ‘original’ and went into retirement before the other girl even got started. Together, (and for the first time) this quartet keeps several crewman from pitching over the side of the carrier, then grab hold of the anchor chain and drag it back out to sea. As the four heroes head back towards land, they are met by Lilith Clay (who does not have a costume yet), and the Dove. After they discuss the curious absence of the Green Lantern, Lilith expresses her ‘bad-vibes’ (remember her telepathic powers) and suggests that this event was orchestrated so as to bring all the heroes together.

Meanwhile, across the continent, the Teen Titans converge on their secret headquarters in Long Island. During the meeting, hotheaded Speedy is angry that Aquaman is placing the blame for Aqualad's mysterious condition on the Titans. We also over hear Mal Duncan (who is dressed in the Guardian guise) arguing with his girlfriend, Karen Beecher regarding why he gave up his Hornblower identity. They are interrupted by a loud noise. As they run outside to investigate, the Titans witness a passenger plane making a nose-dive straight to the ground. As a few of the Titans divert their eyes, Robin announces that the instead of crashing, the plane is amazingly burrowing into the ground. The Guardian, and the Bumblebee, spring into action, and head down into the chasm to offer aid to the distressed passengers. Back up on the surface, Captain Calamity and his minions appear again. He orders the Titans to ‘stand-down’ or he will cause the chasm to cave-in inevitably killing their hero friends and the passengers.

Our story concludes in the next two issues of Teen Titans:

Retrieved from "https://superfriends.fandom.com/wiki/Teen_Titans,_Vol._1_50?oldid=76151"
Community content is available under CC-BY-SA unless otherwise noted.