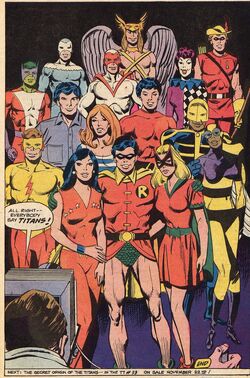 The Teen Titans were an organization of young vigilantes banded together to fight crime, help teenagers and answer calls. Beginning as a group of side-kicks looking to distinguish themselves from their mentors, they would go on to expand into a world-wide establishment.

(In 1976, in the Earth-1A universe) An unfortunate turn of events, have the Titans dealing with the accidental death of a peace activist they were protecting, leading them to reconsider their methods. Displaced and unsure of their future roles, the Titans meet a millionaire industrialist named Loren Jupiter. Jupiter, with the help of psychic Lilith Clay was putting together a training program designed to help young heroes work within a team dynamic at a secret location. Rather than join the training program, Dick (now 18) has decided to attend college in the fall[10] and devote more time to the SuperFriends.[11] The remaining Titans are joined by a tough inner-city kid (and armature boxer), Mal Duncan and existing heroes Hawk and Dove, a duo of teenaged super powered brothers,[12] whom they met in an earlier adventure.[13]

Undeterred, Raven decides to assemble another team of heroes, the ‘Teen Titans!’ She empathically comes to Dick Grayson as he sleeps. (Dick has dropped out of college again and has been staying at the penthouse of the Wayne Foundation building, much to the chagrin of Bruce Wayne). She only tells him that she needs his aid. He awakens to find her astral projection in his room. She hands him the phone and it’s Wally West, who laughs at the notion of a ‘new’ Titans, and hangs up on Dick. Raven then tells Dick that he has done what he needed and that she will do the rest. She tells him to find Wonder Girl and disappears. Robin heads out. As he rides out, he sees a black raven in the night sky, seemingly guiding him. He finds Donna in midtown Manhattan and at the same moment, so does Beast Boy. As Robin begins to explain, Kid Flash arrives. He says that he’s in. They all agree to form a 'New Teen Titans'. Meanwhile, Raven has appeared to Victor Stone outside the football stadium at Newark College in New Jersey. He is angry at his new found appearance and laments that he doesn’t belong anywhere. She responds to his angry lament and says the he belongs with her and others of his kind. Amazingly, the other Titans arrive. Raven then informs them the final Titan has arrived on Earth at that they are all needed at the United Nations Plaza. As they converge on the plaza, they are stunned to see an alien invasion underway. A mysterious orange-skinned girl is being attacked by green aliens. The team jumps into action. They save the mysterious girl. Soon Raven appears and tells them that they were gathered together, not for this battle but for an unseen menace, whose power grows.[23]