Start a Wiki
A Filmation Series:
The Superman/Aquaman Hour of Adventure (JLA segment) 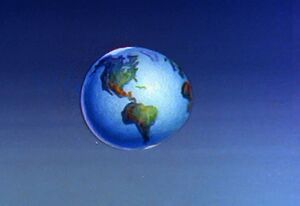 In outer space, a space armada fires a missile on a direct collision course with Earth, it enters the stratosphere, and plunges into the rock formations of a rocky wasteland. Inside the flagship of the space armada, a man informs his captain, Rom-Nex, that the Magno-unit missile is in place. Rom-Nex then orders him to inform the rest of the fleet that it's time to get into attack formation. Just then, his first officer informs him that one ship has broken formation and is heading for Earth. Rom-Nex instantly recognizes that it's Val-Kar's ship. He tells him to order the fleet to attack his ship so that he won't be able to warn earth of their plans.

Instantly the fleet opens fire upon Val-Kar's ship, Val-Kar is able to send a transmission to the Justice League of America, telling them that it is urgent they help him. Superman and Green Lantern instantly respond to his SOS, and fly up into space to save him. Green Lantern uses his power ring to block the energy blasts from the fleet, while Superman takes care of the ships. The Green Lantern creates an construct of a Force Field to protect the ship, and he brings it down to earth, while Superman charges one of the rays blasted at him, and he is unharmed due to his invulnerability, and he bends the ray gun backward and the ship blasts itself instead, causing the ship to explode. This holds of the armada long enough to allow Val-Kar's ship to escape with Green Lantern's aid.

Aboard the flagship, Rom-Nex's first officer informs him that Val-Kar has escaped. Rom-Nex tells him there's no time to lose, and he gives the order to activate the magno-unit missile, his first officer obeys, and a magnetic ray blasts from the missile up toward the sun, causing it to become magnetically attracted to the sun, thereby pulling earth out of its' orbit, and on a direct collision course for the sun.

On Earth, Val-Kar tells the Justice League that Rom-Nex is a criminal warlord from his home world, who was banished, and he has planted a magnetic device that draws the earth closer to the sun, leaving earth vulnerable to invasion, due to the incredible heat. Superman tells the team that they have to hurry, because it's getting hot already.

Back on the flagship, Rom-Nex is informed that earth is already feeling the effects from the sun's heat, because the Polar Ice Cap is starting to melt, and the jungles are beginning to wither and die. At this point, Rom-Nex is convinced that not even the Justice League of America will be strong enough to save the world now.

Back on Earth, Superman is devising a strategy to repel the invasion force. He tells Flash and Atom to track down and destroy the magno-missile. Flash and Atom then speed off. Superman tells Hawkman to protect Val-Kar. Hawkman then takes him to his Hawkship. He tells Green Lantern to hold off the invaders while he pushes earth back into its' natural orbit. Green Lantern takes off, and Superman also takes off toward the sky, and charges back down earthward, slamming onto the ground and pushing the planet as hard as he can, so that he can put it back into it's normal orbit. But even with all of Superman's incredible super strength, is it even remotely possible for him to accomplish a feat this big? Superman strains, and grunts as he pushes with all his might, and incredibly, the planet returns to its' normal orbit, much to the surprise of the alien invaders.

In space, Green Lantern approaches the armada and begins attacking with his power ring. Two ships charge him from two different directions, and he moves, which forces them to crash into each other and they both explode. Green Lantern creates a giant fist to punch another ship, and the ship instantly blows up. Rom-Nex cannot believe his eyes, as he had no idea that it would be so difficult to conquer this planet.

On Earth, Flash and Atom finally locate the missile after their sixth trip around the world. Rom-Nex orders his first officer to activate the missiles armament, and just then energy projectiles are blasted at the heroes, but thanks to Flash's super speed, he is able to dodge them. Atom then makes himself smaller so that he can fit into the cracks of the missile and destroy it from the inside. Flash tells him he did a good job, and that they should get back to headquarters to see how the others are doing. Now that the missile has been turned off, Superman is able to let go of the earth now and returns to space and joins Green Lantern in the battle. Green Lantern creates a sword that cuts of the ship's ray guns, and Superman grabs a ship and tosses it into another one. Rom-Nex orders the fleet to retreat. But it's too late, the ship has been hit, and it begins plummeting earthward, but Hawkman is nearby in his Hawkship, and he observes where the ship crash-lands, and he radios Flash and Atom to tell them.

On Earth, Flash and Atom approach the crashed ship, and the crew have emerged from the ship, and begin firing their ray guns at Flash and Atom. But Flash is too quick of a target, and the two superheroes burst into action. They take out the aliens quickly, by punching them and knocking them out. While in space, Green Lantern and Superman are repelling the rest of the invasion force, and Green Lantern creates a boxing glove that drives them away, and they all retreat. Superman and Green Lantern return to earth.

Back on Earth, Green Lantern tells everyone that Rom-Nex got his wish to occupy earth. And Atom tells him he'll be occupying it in a prison cell. Hawkman tells Val-Kar he will return him to his home world, where he will be viewed as a real hero. Val-Kar tells him "Perhaps. But I shall tell them that the true heroes are the Justice League of America."

The title refers to the fact that Earth is the target of the alien invasion force.

Retrieved from "https://superfriends.fandom.com/wiki/Target_Earth?oldid=84194"
Community content is available under CC-BY-SA unless otherwise noted.