Superman and Wonder Woman
vs. the Sorceress of Time 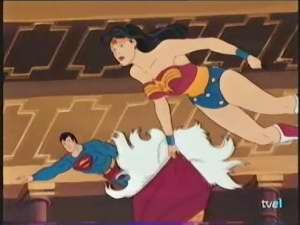 When an evil sorceress named Syrene escapes from her state of suspended animation on Paradise Island upon her imprisonment getting hit by a meteor fragment, she ends up attacking Hippolyta and the other Amazons. Wonder Woman must get help from Superman to take her down. But with Syrene's ability to summon creatures from the mythological past, she proves to be a very great threat. And to make things more complicated, Lois is obviously jealous of Wonder Woman flying off with Superman!

Retrieved from "https://superfriends.fandom.com/wiki/Superman_and_Wonder_Woman_vs._the_Sorceress_of_Time?oldid=72893"
Community content is available under CC-BY-SA unless otherwise noted.