The Superman of Earth-Two was the alternate-universe counterpart of the Superman of Earth-One, who was a part time member of the Justice Society of America and the All-Star Squadron. He has been an active superhero since at least the early 1940's. Early in his career, Superman was remarkably ruthless in his pursuit of justice, sometimes clashing with police and even the National Guard. While he was not a killer, he shed few tears when his opponents died at their own hands or from their own misfiring super-weapons. His adversaries were even more ruthless.

In the parallel universe of Earth-Two (Earth-2A in the SuperFriends Universe), Kal-L was born to Jor-L and Lora on Krypton around 1918. Recognizing that Krypton would soon be destroyed by internal pressures, Jor-L tried to develop a spacecraft to carry his family to safety on Earth, but only a small model was complete by the time the end came. Lora chose to stay with her husband, but they rocketed baby Kal-L to life on a new world just moments before Krypton exploded. He landed on Earth and was found by John and Mary Kent. The Kents rescued the boy from the crashed ship, which destroyed itself later. The Kents took young Kal-L to a local orphanage, declaring him an abandoned child. Young Kal-L soon proved too much for the nurses there to handle, and when the Kents returned to adopt the boy, he was gladly released.[1] They named the boy Clark and took him home to raise on their farm near Smallville.[2]

Clark grew up a bright lad and farm hand to his parents in the 1920s and 1930s, with little suspicion of his fledgling super-powers (unlike his Earth-One counterpart, the original Clark Kent had no costumed career as Superboy). While Clark was still a teenager, he met the time-traveling Earth-One Superboy, who helped him master the use of his Kryptonian powers.[3]

The Kents died a few years later and Clark moved to Metropolis, where he managed to secure a job as a reporter with the Daily Star and began his heroic career as Superman. At the Daily Star, he would meet editor George Taylor, copy boy Jimmy Olsen, and "girl reporter" Lois Lane, who would become the love of his life. Early on, Lois had great contempt for Clark, who feigned timidity and even outright cowardice as a way of concealing his true identity, but her feelings for him softened as she began to suspect he was secretly Superman.[4]

In 1940, Superman joined a group of other costumed mystery-men in thwarting a Nazi attack on Washington, D.C., and stopped the attempted assassination of President Franklin Roosevelt. Afterwards, Superman suggested the assembled heroes form a permanent alliance called the Justice Society of America.[5] Despite this, Superman had only occasional involvement with the group until the late '60s.

In December 1941, Superman was among the heroes captured and imprisoned.[6] As a result, the Man of Steel was unable to intervene when the Japanese attacked the U.S. naval base at Pearl Harbor, Hawaii. However, he and his comrades were soon freed and defeated Degaton and his allies.[7] When freed, Superman and the other heroes then attempted to attack the Japanese fleet only to encounter the mystic "Sphere of Influence" created by the Spear of Destiny and the Holy Grail, then in the possession of Axis leaders. For the rest of World War II, the Man of Steel and other heroes vulnerable to magical energy were unable to enter Axis-held territory without immediately falling under a mental compulsion to fight for the Axis cause.[8] That limitation would cause great anguish for Superman, who could see the atrocities taking place in Nazi Germany, but was unable to intervene.[9]

Superman also served as a charter member of the wartime All-Star Squadron, helping to defend the U.S. from spies, saboteurs, and the Axis metahumans who ventured onto Allied soil. During this time he constructed his remote Secret Citadel (the Earth-One Superman had a Fortress of Solitude)[10] and had his first encounter with Captain Marvel, who was transported to Earth-Two from his native Earth-S. The Captain had fallen victim to the Sphere of Influence.[11] Later, Superman became friends with mystery-man, Batman and his sidekick Robin, whom he had met several times through the JSA and All-Star Squadron.[12]

In the 1970s,[13] a spaceship arrived from Krypton, sent by his uncle Zor-L. The ship contained his cousin, Kara Zor-L.[14] Superman trained Kara in the use of her abilities and she eventually took on a super-powered identity of her own as Power Girl (thereby becoming the Earth-Two equivalent of Supergirl).[15] Superman went into semi-retirement at this point, because but he continued to be active when needed with the Justice Society.[16] He always had time to contended with his longtime adversary Alexei 'Lex' Luthor.[17] Also during the 70's, Clark married in long-time girlfriend Lois Lane[18] and was promoted from senior reporter to Editor-in-Chief of the Daily Star when George Taylor retired. Kent was promoted to that post over fellow reporter, Perry White.[19]

As Editor-in-Chief of the Daily Star, he recovered a diary written by the Batman, implicating the JSA as pawns of Hitler during World War II. He printed the diary's contents in the Daily Star, which resulted in the indictment of the Justice Society. At the resulting public Congressional hearing, the JSAers discovered that Batman had written the diary to direct attention at longtime JSA enemy Per Degaton and his upcoming attempt to conquer time; as a result, the JSA was exonerated.[20]

Continuity from the Superman (1940s cartoons)

The adventures Superman encounters in these serials are mainly representative of events early in his career and end shortly into World War II. He was presented as the strong silent type. Early on, Superman mainly battled crooks, mad scientists, mechanical monsters, dinosaurs and natural disasters. Then as the War started, he battled the Japanese, Adolf Hitler and the Nazis.[21] Lois Lane is a real go-getter and will do anything to get a story.[22] Perry White (not George Taylor) was the editor of the Daily Planet[23] and a young gapped tooth reporter (resembling Jimmy Olson) was Clarks friend.

Kryptonian Physiology: Kal-L's powers were attributed to his Kryptonian physiology, and NOT the radiation of a yellow sun, as all Kryptonians native to this reality did have superpowers in their original red sun system. Hence, Kal-L's powers did not fluctuate under the presence or lack of yellow sun light. This was the primary rationale used for his lower superpower levels to his other dimensional counterparts and his aging.

Superman outside the Daily Planet

Superman with the Atom.[24] 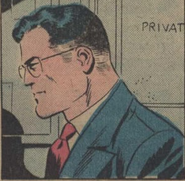 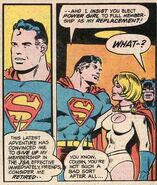 Superman retires, handing over his duties to his cousin Power Girl.[25]