You may be looking for The SuperFriends ComicBook (1976-81). 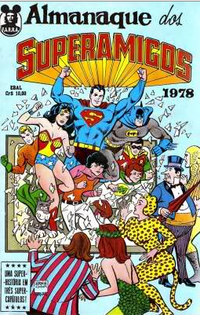 In Latin America, the series was called "Superamigos" (Spanish/Portuguese for Superfriends). These issues were published by Ebal and Editora Abril and featured reprints of the English language DC Comics translated into the native language, none of which were even part of the American Superfriends comic, but were reprints of Warlord, Daring Adventures of Supergirl, Camelot 3000 and even Crisis On Infinite Earths.

Retrieved from "https://superfriends.fandom.com/wiki/Superamigos_Comic_Books?oldid=82123"
Community content is available under CC-BY-SA unless otherwise noted.