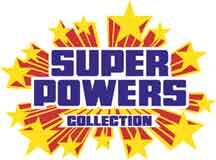 The Super Powers Collection was a line of action figures based on DC Comics superheroes and supervillains that was created by Kenner Toys[1] in the 1980s. The Super Powers toys spawned a franchise of collectibles, comics, color books and more. There was a variety of knockoffs, like Toy Biz's DC Comics Super Heroes line, and several others from other countries. Kenner's Super Powers figures remained popular well into the 1990s, when they launched a new line of action figures based upon the classic DC characters: Total Justice.

Origin of the line

DC Comics awarded the license of their characters to Kenner Toys, hot on the heels of Mattel's "action feature" heavy He-Man toy line. Winning the license away from Mego Corporation and Mattel with their emphasis on action and art, Kenner devised hidden mechanisms within the figures that would trigger an action when the figures legs or arms were squeezed. This emphasis on each figure's "super power" led to the naming of the line - The Super Powers Collection. Each figure in the first two series were also packaged with a mini-comic featuring that character's adventures (a detailed list of these minicomics can be found at List of Super Powers Minicomics).

Once the line was in full force a merchandising frenzy took place, with DC Comics and Kenner slapping a Super Powers logo on whatever they possibly could. Three series of figures and accessories were released: in 1984, 1985, and 1986.

In addition, the toy line helped establish the mainstream acceptance of artist Jack Kirby's seminal "Fourth World" characters, particularly Darkseid and his minions. Evidently, the Kenner representatives were interested in a cosmic line of villains for the superhero characters, and Kirby's creations were deemed ideal by them for this purpose. In fact, Kirby was commissioned to design the action figures for his characters, such as Darkseid, which resulted in the only time Kirby directly monetarily benefitted from his comic book creations apart from his work-for-hire wages. Another major comic book creator, George Perez, was similarly commissioned to design the action figure for his character, Cyborg.

Tie-ins, products and other media

DC Comics produced three comic book mini-series featuring characters from the toyline, one during each year of the toyline's existence. These comics were separate from the continuity of the regular comics featuring the characters.[2]

Warner Home Video used the opportunity to issue episodes of Superman, Batman, Superboy, and Aquaman produced by Filmation in 1966 on video cassette in 1985 under the Super Powers label, reissuing them again in 1996.

Burger King produced a line of cup-holders, available at their Burger King restaurants in 1986.

Other tie-in products were produced, including lunchboxes, posters and interactive books. Only the toy line carried the "Collection" tag; all other merchandise would have a solo "Super Powers" logo. The DC Heroes role playing game by Mayfair Games started during this period, and it tied into the line as well. Also there was the Which Way Books, and many other items.

Super Powers products were being released well into the '90s. Toy Biz released a knockoff Super Powers line called DC Comics Super Heroes. During this time, McDonald's released a set of four Happy Meal toys which had the Looney Tunes as DC Comics Super Heroes. Eventually, the rights to use DC Comics characters was again acquired by Kenner, who this time, focused on solo Superman and Batman lines, such as Legends of Batman and Superman: Man of Steel. By 1996, Kenner once again set its' sights on the greater DC Universe with a brand new action figure line called Total Justice.

In the late 2010s, Tweeterhead began making maquette statues for the Super Powers Collection. One of them was the Harley Quinn statue, released in 2017.

Based on definitive style guide artwork, with moderate articulation and hidden action features, the Super Powers Collection eventually released 34 figures, eight vehicles, and one playset. The following figures were released to regular retail outlets during the three years the line was produced:

In addition, a mail-in only exclusive Clark Kent figure was produced.

In the mid-eighties, a Latin-American toy company (Gulliver Juguetes) located in Brazil began producing its own Super Powers Collection line.

The The Riddler, was a Green Lantern figure repaint released in Argentina. Captain Ray and the Abominable Snowman were exclusive characters released in Colombia.[?]

Several vehicles were released as part of the line:

A collectible is born

Highly prized today, Kenner's distribution practices of including up to 18 of one character in a case of 24 led to a glut of the core characters throughout the life of the line, and a rapid demise. Due to this practice, certain figures such as Cyborg, Golden Pharaoh, and Plastic Man remain rare to this day while the Flash and Superman are easily found. Another reason the Super Powers Collection is so highly sought after is the inclusion of both popular and little-known characters throughout the line. While the First Series featured well-known characters, the Second Series concentrated on figures from Jack Kirby's New Gods Saga, and the Third Series mixed both DC Comics acquisitions from other companies and figures created solely for the line. On a side note, Kirby received some of the only royalties of his long career for redesigning his characters for Kenner. Artist George Pérez also received royalties for his design of Cyborg and redesign of Lex Luthor and Brainiac. Most all other designs (and much of the packaging artwork) is based on José Luis García-López's classic DC Style Guides. Other artwork used appears to be the work of Dick Giordano.

End of the Toyline

After three years of production the line collapsed. The same year, coincidentally, Kenner's Star Wars line stopped shipping to stores. After 10 years of chronicling the history of the Super Powers Collection, in 2003 toy historian Jason Geyer's ToyOtter website revealed the never seen designs for the unmade Series Four, Five, and Six, along with vehicles, playsets and a deluxe "Power Plus" figure line. The most famous of these is the Man-Bat figure, of which an actual prototype was created.

Prior to Super Powers, one manufacturer (in this case, the Mego Corporation) licensed both DC and Marvel characters for action figures. When the Secret Wars toyline, by Mattel, came onto the retail toy scene, it was setup as direct competition for the Kenner line. These figures, similar in scale to the Super Powers Collection, introduced a completing marketing strategy between manufacturers of Marvel and DC action figures, continuing to separate the comic book publishers' character licenses. That trend continues to this day.

The DC Super Powers line, in many ways inspired the 1989 Toy Biz DC Super Heroes toyline in design. This line, merging with the Batman (1989 film) toyline would borrow design elements from many of the Kenner figures, most notably Superman, Robin, and Penguin who were near identical copies of the Kenner figures. A Riddler figure was released that used the modified body of Super Powers Flash.

Gulliver Juguetes is a Brazilian toy making/distributing company founded in 1969 by Mariano Lavin Ortiz. The company is most famously known in the US and among comic book fans for creating nine characters produced for the Super Powers/Super Heroes Collection, in their take on Kenner's Super Powers Collection action figures. Specifically, Captain Lightning (El Capitan Rayo/Captain Ray) and the Abominable Snowman (Hombre de las Nieves).