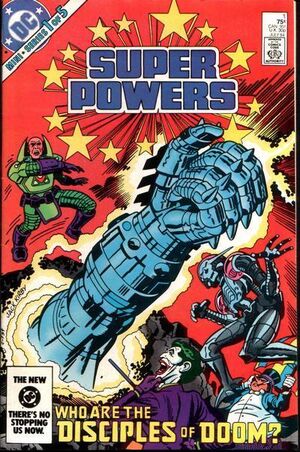 On the planet Apokolips, a contest is being held to see who is the greatest warriors. The contestants battle each other to the death. Out of hundreds of contestants, only four survive. And they are chosen to be Darkseid's Emissaries of Doom. They are then granted a small fraction of Darkseid's power and are ordered to travel to earth on a mission to misdirect the superheroes of earth, namely the Justice League.

Later, somewhere in deep space, on an asteroid, Lex Luthor is mourning the death of his wife and son, who were killed along with his adopted planet during his last encounter with Superman.[1] He made a carved image of his wife and son from the asteroid. One of the Emissaries of Doom approaches him, and tells him to return to earth with him and then he will give him the power necessary to destroy Superman so that he can have his revenge. Lex Luthor agrees, and they shake hands and consider themselves partners.

Meanwhile on earth, Superman is racing the Flash for a charity race, but it is soon interrupted by Lex Luthor, who now has time distortion powers! With a blast from his power suit, he's able to take out Superman and Flash with ease!

At that moment, high above Gotham City, the Penguin is being transported to prison in a helicopter, but he manages to break free and uses his umbrella gas to knock out the pilot and the passenger. The helicopter falls earthward, and Penguin opens up his umbrella and bails out, using it as a parachute, but it is unable to withstand the force of the wind, and it folds inside out, causing him to fall ever faster toward the water at Gotham Harbor, but he is saved by another Emissary of Doom, and he too grants the Penguin incredible super powers....the ability to control birds!

Not far from Gotham Harbor, Aquaman looks into the sky and observes a bunch of birds that the Penguin is controlling, uncertain as to why the skies are so thick with birds!

Meanwhile, in Los Angeles, Hal Jordan is being attacked by a bunch of birds. Hal learns that there are millions of birds causing chaos all over the country in every major city. Using his power ring, he is able to transport himself to the source of the madness, Gotham City, where he faces the Penguin. Trying to take down the Penguin with his power ring, he finds that the Penguin somehow warped his will power.

Meanwhile, deep in outer space, Brainiac's ship has been caught in a black hole, which was to send him to another universe, but he is stopped by one of Darkseid's Emissaries of Doom. He directs Brainiac's attention to his monitor screen and he sees Paradise Island, and Wonder Woman is there along with her amazon sisters fighting male warriors. He asks Brainiac to imagine what it would be like if their love for war was to be rekindled, and their peace keeping ways were to be a thing of the past. He goes on to ask him to imagine the amount of research that would be involved with studying a long dormant civilization that rises to take over the world. He then goes on to say that it would be Brainiac himself that would see that this would come about, by giving him the power to stir up racial memories to use on the amazons. And so his power is granted to him.

At the same time, in Arkham Asylum, Joker is going through a session with his psychiatrist, and just then, another one of Darkseid's Emissaries of Doom appears, and grants him a super power as well.

Elsewhere on the streets of Gotham, Batman and Robin are chasing a supervillain called Retrorocket down the street, but he takes to the skies with his rocketpack, and he faces Hawkman, who takes him out. He is then turned over to the police. Just then, Batman, Robin and Hawkman are transported to some strange dimension. And Joker is there, and he sends the three of them falling into a bottomless pit!

Retrieved from "https://superfriends.fandom.com/wiki/Super_Powers_Vol_1_1?oldid=16572"
Community content is available under CC-BY-SA unless otherwise noted.