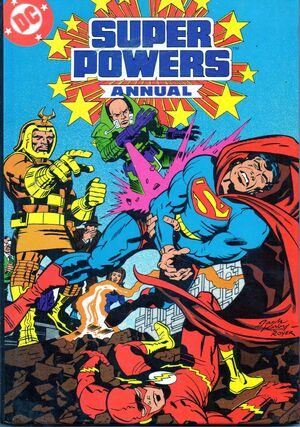 This issue of Super Powers was the annual issue.

It was published by Marvel UK, an imprint of Marvel Comics that was licencing DC Comics titles at the time.

This was the story originally published in 1984, featuring the Super Powers Team.

The Treasure of the Hawk-God's Tomb!

This was a story originally printed in 1982, which featured an adventure with Batman and Hawkman.

Between Friend and Foe!

This was a story featuring Superman and Green Lantern. It was originally published in 1980.

Retrieved from "https://superfriends.fandom.com/wiki/Super_Powers_Annual?oldid=94372"
Community content is available under CC-BY-SA unless otherwise noted.