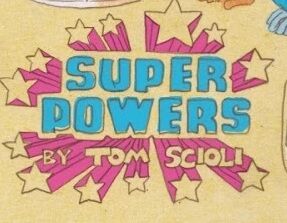 The SuperFriends Cave Carson Has a Cybernetic Eye # 2

Somewhere in an ocean, an underwater archaeologist named Flipper Dipper, complete with his scuba equipment and diving gear, is talking to Gabby about the Sea Devils as he dives into the ocean. He and his team begin swimming into the depths. They come across some kind of underwater ruins, and they examine the hieroglyphics, which Flipper reads, "Anti-Life Forever." They then apparently find themselves in the Outer Darkness, a hellish, undersea abyss of doom. They are then approached by a giant monster that resembles the mythological Cerberus, who looks like a giant three-headed dog with a snake for a tail. The three divers then do battle with the large undersea beast.

While elsewhere, Captain Marvel, Jr. is nailed to the Rock of Eternity. He had been nailed to it for three days. He then shouts the name of the famed superhero..."Captain Marvel!" Lightning crashes, changing him back into Freddy Freeman. But in his mortal form, he fares no better. His crutches fall into what seems like eternity.

While elsewhere in the Rock of Eternity, Flipper Dipper, who apparently escaped from death from the three-headed monster, locates the prison which houses the Seven Deadly Enemies of Man. He has a torch, which he uses some of the fire to light the dark place. He sees what was clearly an empty chair at first, the ghostly image of the wizard Shazam. His ghostly hands then write on the wall: "The deadliest of man's Seven Enemies has broken free, and does the will of the Dark God."

Meanwhile, in the 1940s, near the Swiss Border during World War II, Thaddeus Brown used his train as a sort of "Underground Railroad" for European war refugees. Nazi military officers are holding him at gunpoint, but he tells them that he has no interest in politics, and that he is a humble entertainer He goes on to tell them that Hitler is a personal friend of his. He also tells them that he's not a magician, he's an escape artist.

While back on Exxor, much later in the 20th century; Gleek is getting some sort of medical examination by an Exxorian Doctor who tells the Royal Twins that the Mentascope shows nothing physically wrong with Gleek, so he concludes that he must be suffering from acute simian melancholia.

Later the twins try to make Gleek feel better, they show him a portrait that was made when their father took him back from safari in the Jungle Zone. The twins decide to take Gleek to the jungle, and so they tell their father and mother.

They are transported through the jungle by sedan chair where they see a variety of sights, such as Exxorian lions, Exxorian doves, Exxorian arboreals and Exxorian elephants.

Inside the sedan chair, Zan is bored, and he is glad that he has Earth Holovids he can watch. The holovid has an image of Batgirl saying: "Look out! It's the Joker!" Jayna told Zan that it's a shame that their cousin Lily couldn't join them, but she quickly admitted it would be a bit cramped for all of them. They then look out the window, and Gleek puts his hand on the glass. He sees dozens upon dozens of his own kind. Climbing all over ancient skull-shaped stone structures, and through trees. Gleek is scared to meet them, but Jayna said it would make him happy, and it would be good for his health. The monkeys come down to see Gleek, they begin sniffing him, but they don't seem to like him, and they leave. Zan pushes Gleek to go after them, as the twins fear he'll be left behind, but Gleek is frightened...or perhaps shy. One of the monkeys pushes Gleek back towards the twins. He has been rejected by his own people. Seeing that they didn't want him anyway, they apologized to Gleek, never thinking about asking him what he wanted. Gleek acted in such a way that let them know that the monkeys weren't his family anymore...the twins are.

Page Three
Add a photo to this gallery

Retrieved from "https://superfriends.fandom.com/wiki/Super_Powers,_Part_Two?oldid=70757"
Community content is available under CC-BY-SA unless otherwise noted.