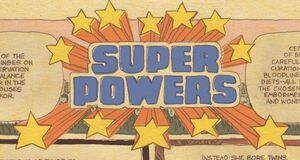 The SuperFriends Cave Carson Has a Cybernetic Eye # 1

On the planet known as Exxor, centuries of breeding and careful pairing had been done in order to bring forth the Chosen One, the living embodiment of the will of Exxor. Within the Royal Houses of Exxor, it was expected that Queen Rayna would give birth to the Chosen One. Instead, she gave birth to twins.

Years pass, the queen and her husband, along with their royal adviser called the Sphinx, watch as Zan and Jayna ride their pets. Jayna, calling her pet Gilgamesh, urges the beast to fly higher, so as to not allow Zan to beat them. Zan urges his animal as well, and he tells her: "Eat my dust, Jayna!" Rayna coughs as she mentions that she wish she had a third child.

As the two of them reach the end of their race, Zan turns to a palace servant named Equis and asks who won, but Equis admitted it was too close to tell. Jayna then turns to her Exxorian monkey she named Gleek, asking what he thought. He simply claps his hands. The Royal Twins then take a bow, and Zan asks his father what he thought. He then tells them both they are too old to be playing with unicorns. The King turns to Sphinx and asks him his opinion, but he humbly tells him that it's not his place to say.

Jayna and her brother talks to their mother, and her mother tells her that her babies are nearly tall as "their dear old mother." Zan asks why "that man" always has the be there, and Rayna tells him that his father believes that Sphinx is one of the wisest men on Exxor. Just then, Rayna notices that Zan is soaking wet, and she assumes he must be burning up. But he tells her he actually feels quite cold. She then looks at Jayna and tells her she is breaking out in a terrible rash. This hurts Jayna's feelings and she runs off, asking her mother why she must be so cruel. Zan asks his father if he should go fetch her, but his father tells them they'll all go together.

Meanwhile, on a slightly more familiar looking planet known as Earth, the bat-signal shines high in the skies of Gotham City. A car can be seen driving down a street, approaching what appears to be a massive tank...a tank with a clown face...a tank that could best be described as a Joke Machine. The car attempts to avoid it, but it crashes into it. And now, at a bank, a man is being forced to open a bank vault, but he tells the robber that he shot the man who knew the combination. Just then, a hammer, more specifically, a mallet, starts talking, telling the man holding him...who happens to be a certain "Clown Prince of Crime," That he has an idea. This is no ordinary mallet, this one is sentient. A living machine based upon Motherbox technology that clearly was given to the Joker by the Apokoliptians, more specifically...Darkseid; or one of his servants. Joker's Joketroopers then come flooding out of the Joke Machine.

While off in the distance, Batgirl is on her BMX bicycle ready to take on the Joker. As the Joker raises his mallet, about to bash the man's brains in, she starts pedaling, fast! She reaches the scene where the Gotham City Police Department have gathered. Some police officers are attempting to clear the area, which is flooded with pedestrians, while others are opening fire on the Jokertroopers. Commissioner James Gordon is on the scene, he lights his pipe and and pulls out his revolver, only to be told by a Jokertrooper; holding a gun in his face, to get on his knees, just then Batgirl jumps off her bike and delivers a kick into the two would be cop killers, knocking them to the ground. She asks her father if he's okay, realizing she accidentally called him "dad," quickly correcting herself and calling him "commissioner" instead, so as to keep her secret identity. She asks what was going on, and Gordon tells her someone is sending a message...that there's a new boss in Gotham.

Page Three
Add a photo to this gallery

Retrieved from "https://superfriends.fandom.com/wiki/Super_Powers,_Part_One?oldid=72109"
Community content is available under CC-BY-SA unless otherwise noted.