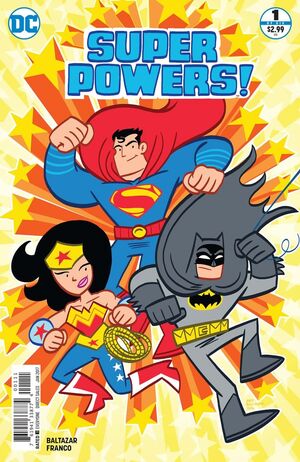 James Gordon shines the Bat-signal in the skies of Gotham. Batman has been missing. The Man of Steel arrives telling him he'll do what he can and he takes on some of Batman's worst supervillains, with a little help from Batgirl.

Meanwhile, Batman is being held captive by Brainiac on New Krypton, in the city of Kandor. Wonder Woman is alerted to this on Paradise Island by her mother, who is observing her demonstrating her incredible skills.

Sometime later, Superman arrives at Kandor to tell his father Jor-El, that Brainiac is in need of some parental guidance. He then goes to face Brainiac directly and frees Batman by blasting the robotic tentacles that were ensnaring him with his heat vision. Batman is then free to join in the fight, and tosses batarangs at him. Wonder Woman soon arrives and entangles him with her lasso, and they learn that Brainiac doesn't know why he is doing what he is doing.

The fight continues until Batman pulls his cellphone or some other electronic mobile device, and plugs what appears to be a Green Kryptonite plug into it, he then sends an email to Brainiac, who receives it on his arm, but it was encrypted with Kryptonite so it causes him to drop to the floor in pain, since he is a Kryptonian android. Superman questions how Batman even was able to do that; and the Caped Crusader simply gave him the answer: "I'm Batman."

Alfred then arrives in the Batplane and Batman jumps in, and then tells Superman and Wonder Woman that Brainiac's speech patterns were irregular, and that he isn't the mastermind behind what was going on.

Elsewhere, somewhere in the Pacific, Luthor has a secret Kryptonite Fortress that he is hiding out at. He is communicating with someone with a Kryptonian crystal, telling whoever the person is that Lara is about to give birth to a new child. He tells the person that soon they will steal the baby once it's born.

Retrieved from "https://superfriends.fandom.com/wiki/Super_Powers!_1?oldid=66756"
Community content is available under CC-BY-SA unless otherwise noted.