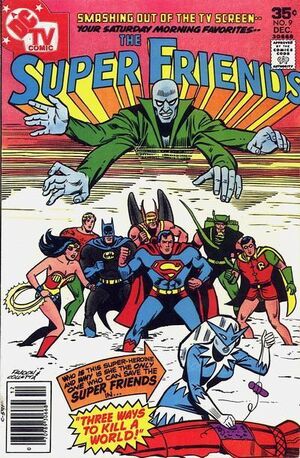 Last part of a 3-part story.

Three Ways to Kill a World

Nine deadly devices have been rendered harmless by the Justice League and their allies. But three bombs remain – the deadliest of all! They have been planted on Earth’s two smallest continents and on an unseen one. Three JLAers have been dispatched to aid three other heroes in disposing of these menaces. They have just over 30 minutes to complete the task.

Green Arrow is in Australia with Hugh Dawkins, aka the Tasmanian Devil. This bomb is unique in that it is made with White Kryptonite, which is not harmful to Superman but will fill the atmosphere, eventually killing all plant life on Earth. They defeat Grax’s guards and disarm the bomb.

At the same time … Aquaman is disarming a bomb in the mid-Atlantic with Little Mermaid.

At the same time … Wonder Woman is in Greece with Arstides Demetrios, aka the Olympian. They come across Colonel Conquest, a petty villain with aspirations of world-domination. They easily defeat him and head back the JL Satellite HQ with only 15 minutes remaining. They realize that the last continent was not Greece but Antarctica. Realizing that any elevation in tempatre will cause the bomb to explode, they decide to contact the Norwegian heroine, Icemaiden. She arrives in the satellite 30 seconds later to be briefed. Batman, Robin, Hawkman, Hawkgirl, Superman and Green Arrow beam down to Antarctica to battle the alien creatures. Icemaiden is off to dismantle the bomb.

Meanwhile, the four teenagers are left alone in the satellite researching the affects of a melted Antarctic icecap. Suddenly Grax himself appears. He wishes to destroy the Wonder Twins for revealing his plan. Relying on his intellect alone, he is not prepared for the physical attack brought upon him by Marvin and Wendy. Together they overpower him.

After the bomb is dismantled in Antarctica, the JLAers beam back up to the Satellite HQ. Upon arrival they celebrate the dismantling of the bombs and the capturing of Grax. Robin says that the Jr. SuperFriends, Wendy and Marvin have passed with flying colors – they’ve graduated!

Wendy and Marvin however, announce that they are retiring and want to go to college. Wendy has been offered Amazonian training on Paradise Island. Marvin has been offered scholarships from Ivy University, Raleigh College (where Lois Lane attended) and Gotham University.

The Wonder Twins speak up and say they are orphans and would love the opportunity to train in the Hall of Justice. And so, as the first Junior SuperFriends leave, new ones take their places.

That wraps up our three-part story.

First and Only Appearance

Retrieved from "https://superfriends.fandom.com/wiki/Super_Friends_9?oldid=82552"
Community content is available under CC-BY-SA unless otherwise noted.