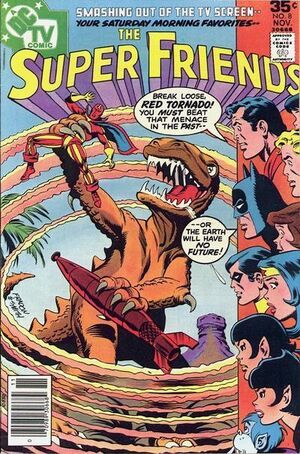 In 26 minutes, five more bombs will wipe out the minds of the world’s populous!

Warned by the Wonder Twins, the Justice League and their international hero friends are looking for bombs hidden all over Earth by the alien villain Grax.

For this second group of amnesia bombs, the Atom, along with a local, Asian superhero the Rising Sun are in Japan dismantling the first of the bombs. In Ireland, Green Lantern teams up with Jack O'Lantern. They are met with Grax’s alien dogs. After a brief battle, they too are able to dismantle their bomb. The rest of our heroes are also successful. The Red Tornado joins forces with Tuatara of New Zealand, Batman and Robin are in Venezuela with the Bushmaster, and the Black Canary is on the Island of Taiwan with the Thunderlord.

Meanwhile, high above the earth in the JL Satellite HQ, the four teens help locate the remaining three bombs. The danger they pose, is still unknown. Wonder Woman is transporting down to Greece. Aquaman is on deck waiting his turn to beam down to the surface.

The story concludes in next issue.

Retrieved from "https://superfriends.fandom.com/wiki/Super_Friends_8?oldid=82549"
Community content is available under CC-BY-SA unless otherwise noted.