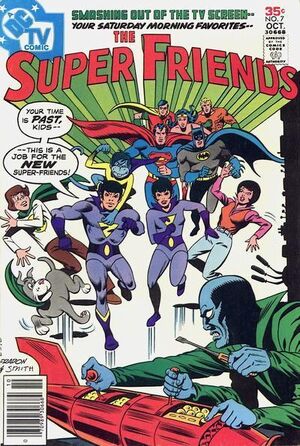 Part one of a three-issue story.

The Warning of the Wonder Twins

Two aliens youths (Zan and Jayna) from the planet Exxor crash-land on in the country, outside of Gotham City. They are greeted by Wendy and Marvin, who were the only two at the Hall of Justice when the Twins broke orbit. They rush to the crash site and are informed that the Earth is in danger.

The Twins are able to communicate speaking Interlac (and Intergalactic space language). They relay to Wendy and Marvin what they overheard back on their home planet. Grax, Superman’s old enemy, has seeded the Earth with 12 deadly bombs scattered throughout the Earth – one on the six visible continents, one on an unseen continent, and one on five inhabited islands.

Wendy wants to summon the SuperFriends, so they can contact the Justice League. She uses her signal bracelet. The four teenagers and their two pets are beamed up to the JL Satellite HQ.

The Twins tell the Justice League the first four bombs are set to go off in less than an hour. IF they fail, the next five will be activated 26 minutes later. Then the final three 47 minutes after that. The first group will destroy the people’s memory of the past. The second group will wipe everyone’s mind blank .. so they wouldn’t even know enough to eat. They don’t know what the last group of three will do. While the Twins are explaining the dilemma to the Justice League, Wendy and Marvin use the JLA Computer to locate all of Earth’s heroes … so that the JLA can team up with the heroes closest to where the bombs are. The two then beam the Justice Leaguers down so they can get started.

Superman heads to Israel and teams with the Hebrew hero, the Seraph.

The Flash heads to South Africa and teams with a superfast Zula named Impala.

Hawkman and Hawkgirl head to Oklahoma and team up with the Native American heroine Owlwoman.

Superman and Impala dismantle their ‘culture’ bomb in record time. By using Godiva’s hair as shield, Elongated man is able to dismantle the bomb. Impala and the Flash work together. Impala jumps high enough to reach the bomb and pull it out of its low orbit. Before it hits the ground, the Flash is able to disarm it. Hawkman, Hawkgirl and Owlwoman have a different problem. Their bomb is surround by darkness inhabited by evil creatures. After a valiant battle, the three successfully disarm their bomb.

The first set of bombs have been successfully disarmed. Now we look to the second group of amnesia bombs and check in the with the Atom, Green Lantern, Batman, Robin, Black Canary and the Red Tornado. They have 25 minutes to save the day.

Story continues in the next two issues: Issue #8 and Issue #9.

Retrieved from "https://superfriends.fandom.com/wiki/Super_Friends_7?oldid=88639"
Community content is available under CC-BY-SA unless otherwise noted.