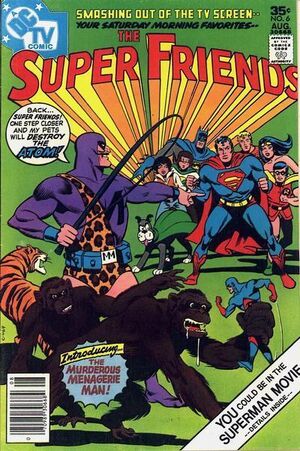 The Menace of the Menagerie Man

At Gotham Garden a charity basketball game (Gazelles vs. Cheetahs) is underway. Among the Spectators are Wendy Harris and Marvin White.

A man in a strange get-up appears and conjures up real gazelles and cheetahs. He asks the crowd to toss their valuables down to him or he will sick the gazelles and cheetahs on to them. He then conjures up chimpanzees to collect the valuables. Wendy uses her special signal bracelet to summon the Batman. Batman arrives and the mysterious man disappears in the same fashion he conjured up the animals. All that's left is a lone dog. Batman, Wendy and Marvin decide to gather the SuperFriends together at the Hall of Justice to discuss this Menace. JLA memeber the Atom decides to tag along because he would like to repay Wendy and Marvin for saving his life.[1]

While they discus, Commissioner Gordon pops up on the Trouble Alert alert screen (says that he couldn't get Batman 'on the line' so he thought he would check the Hall) and informs the SuperFriends that the Menagerie Man has struck again. He had robbed the celebrities at the opening-night of The Big Dipper Nightclub. He used Bears to perform the crime. Robin figures out that the Big Dipper is also called the Ursa Major -- the 'big bear'! The SuperFriends figure they have at least till tomorrow night before he strikes again.

Wonder Woman decides to stake out the fashion show of furs at Chez O'Shea's.

Superman will cover the play opening at the Hippodrome.

Robin is going to stakeout The Rock concert at Gotham Stadium. One of the groups that is playing is the Great Frog (this band features two of Robin's pals... Roy 'Speedy' Harper on drums and Mal 'Hornblower' Duncan on the trumpet).

Batman is heading to the testimonial dinner for author Stephen Wolfe because he believes that plenty of wealthy people will be there.

Aquaman will be at the world premiere of a new movie - the Sea Lions.

Wendy and Marvin accompany the Atom to a special showing of a collection of 'Cat's Eye Jewels' at the Palace of Gems.

Batman then deduces that the only place for the Menagerie man to show up the following night is the Ivory Exhibition at the Danbury Gallery... because Ivory comes from animals. This time all the SuperFriends decide to show.

Just as expected, the Menagerie Man shows this time with trained walruses; however Aquaman is easily able to control them and the other animals he brought. This time as the Menagerie Man tries to make his escape on his pet dog, Wonder Dog is there to stop him. The Menagerie Man is then easily overcome by the Atom.

Later at the Hall of Justice, the Atom relays back to them what else he learned. He tells them that the Menagerie man did in fact find a piece Dwarf Star fragment but it took him Lee ears to learn how to use it. Then this man also worked at the Gotham Zoo. That is where he got the animals.

Then Superman decides that it's time to tell Wendy and Marvin why the Atom joined them on this case. The Atom proceeds to tell them that since they saved the Justice League from the World Beater, they felt the duo was do for final exam. The SuperFriends wanted to see how Wendy and Marvin would perform on an actual case to see if they were ready. They conclude that they are.

Marvin gives a little push back and says all we did was stand around. The Atom responds by saying, you spotted the most important clues before the SuperFriends did and you trained Wonder to stop the supervillains escape.

And that is the conclusion.

Retrieved from "https://superfriends.fandom.com/wiki/Super_Friends_6?oldid=88646"
Community content is available under CC-BY-SA unless otherwise noted.