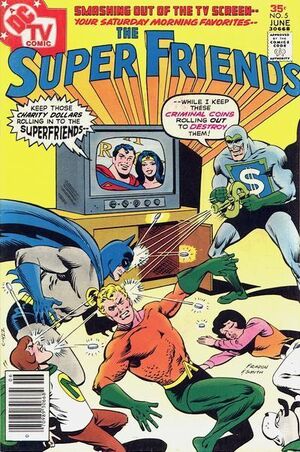 Greenback chooses to begin his crime spree during the third annual, Justice League 'Super-Thon' in Midtown Metropolis that is hosted by the SuperFriends and their teenage sidekicks Wendy and Marvin.

His plan involves two components, both of which hinge on the superheroes hanging around the TV studio making oblique references to other superheroes (For example: Harvey's old Black Cat, Siegel and Shuster's Funnyman and even Iron Man, among others, get either a shout-out or a brief appearance). [1] The first part of Greenback's pan hinges on the hope that the superheroes will be too busy answering the phone to fight crime. [2] The second part of his plan is to kidnap all the richest donors who call into the telethon. He can do this because the Super Friends are very wisely giving out the home addresses of their biggest contributors right over the air.

Greenback already seems to know where the biggest donors already live, and he's only waiting for their names to be mentioned on the air. It also appears that every time someone donates from New York, he moans about not wanting to go that far away.

When he finally abducts his first wealthy guy, it's Bruce Wayne, so that's bad luck for Greenback. One by one the Super Friends pursue the abducted Batman, eventually leaving only Wonder Woman and Superman on the phones.

Eventually, Greenback has to tackle the Super Friends head-on, armed only with a dollar-sign-shaped gun. It's a less-than-fatal weapon, but it allows him sufficient time to escape, carrying a huge bag of money.

Unsurprisingly, he got caught. 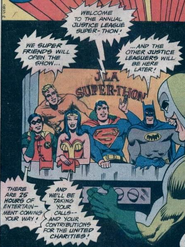 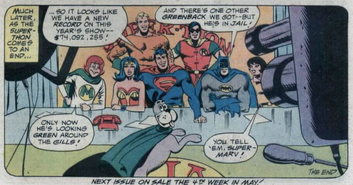