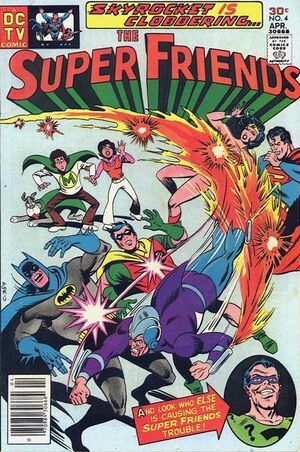 The SuperFriends must deal with the dual crimes of the Riddler and Skyrocket. The Riddler hacks the Trouble Alert with a riddle: "When does a WonderDog cause his master the most worry?" This sends Wonder Woman and Superman to the Museum of Music where they find Skyrocket robbing the place. Together they successfully thwart the crime, but Skyrocket escapes. Meanwhile, back the Hall of Justice, the Trouble Alert sounds off again and this time its Commissioner Gordon. He tells Batman and Robin that the Riddler has been spotted at the West Side Kennels. The Dynamic Duo rushes to the high end kennels fearing that the Riddler will hold these dogs ransom for money. But have no fear, the crime is prevented, the henchmen are captured but the Riddler does escape.

Back at the Hall of Justice, the Riddler successfully infiltrates the Trouble Alert system again and provides another riddle: "Why is Wendy an unusual name?" Robin guess that its because the 'end' comes in the middle. This leads the SuperFriends to one of two locations: [1] Since a day ends at midnight, this may be a reference to Jeannine Gale's performance at the Castle Theater that evening where she'll perform her latest hit, 'Midnight in the Andes.' Or this could refer to [2] the performance of Romeo and Juliet that evening as well and specifically the murder of Mercutio (played by Sir Harvey Arden) who is killed in the middle of a five act play. His end comes in the middle.

Robin and Wonder Woman head to the Castle Theater. And sure enough, Skyrocket appears. It is clear now that he nothing more than a petty thief. His crimes are prevented, but he escapes. Batman and Superman head to the performance of Romeo and Juliet and this time they capture the Riddler. They find out that he considered Skyrocket a rival, so he tried to put the SuperFriends on his trail so he could get a way with his crimes. The heroes realize that he probably knows Skyrockets next criminal outing. He does. He answers them with yet another riddle: "Where does Marvin have a green thumb?"

Robin believes this is a reference to 'Marvin Gardens' from Monopoly Game. Wendy chimes in and say that 'Marvin Gardens' is in the same group as Atlantic Ave., Ventnor Ave., and the Water Works. Batman adds that there is a ship named Ventnor on the Atlantic at the water front docking in the water. Its cargo is the valuable Chromium. And their off...

They rush to the water front. This time they have plan. As Skyrocket flies over the water, several whales shoot up and out of the water effectively dousing him with several gallons of water. This renders him unable to fly and he plunges into the water, where Aquaman easily captures him.