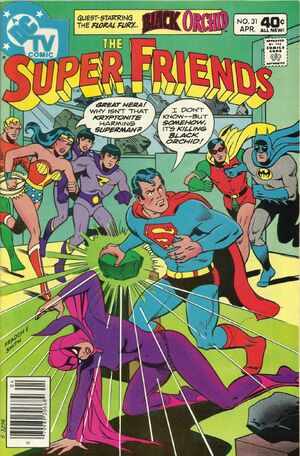 Convinced that Black Orchid is a Kryptonian, Lisa Patrick purchased a large chunk of kryptonite on the black market.

Patrick tries to lure her to the meteorite display at the Gotham City Museum of Natural History. She inadvertebtly attracts the Justice League as well.

Black Orchid places a force field around the kryptonite to protect Superman, but the force field harms her, instead, further convincing Patrick that she is Kryptonian, not noting the lack of effect on Superman.

Superman takes the kryptonite into space, and Black Orchid follows him to take it as a brief hand-off so that the fragments will not kill him. When she survives the explosion, Superman inquires where she is from and how she got her powers; her answer -- Earth.

Retrieved from "https://superfriends.fandom.com/wiki/Super_Friends_31?oldid=82565"
Community content is available under CC-BY-SA unless otherwise noted.