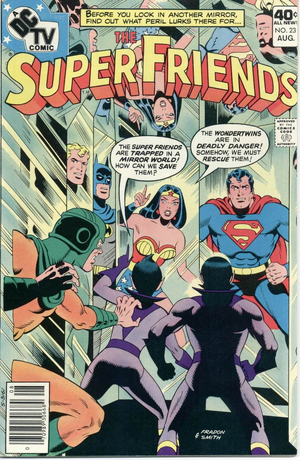 Our story begins with the Wonder Twins in their secret identities of John and Joanna Flemming. They are sitting with a couple of their Gotham Central High classmates in the lunch room.  Jayna talks with one of her girlfriends about the charm bracelet she’s wearing. She says it was a gift from their Guardian, Professor Nichols.

As they talked about the bracelet, one of the charms begins to glow. She responds quickly by saying the professor must be calling them.  John chimes in and says they got homework to do anyway and they take off.

They find a secluded spot to hear the message. It's Superman.  He says that he needs their help against an incredible thief at the Gotham Plaza Hotel.  He tells the pair that the many of the Justice League members are busy except for the Flash, who’s on monitor duty at the Justice League Satellite headquarters.

Jayna becomes a crow and Zan becomes a bar of ice. They fly off with Jayna carrying Zan.

Outside the Gotham Plaza Hotel, Zan, unlike Jayna has to do a quick change from his civilian identity (Note: the margin notes state that Jayna can take any animal form, including human.).

They enter excitedly commenting on how this is the first time they’ve called them for aid. They look around and don’t see the SuperFriends, so they ask the desk clerk.  At that very moment the SuperFriends (Aquaman, Wonder Woman, Superman and Batman and Robin) enter the lobby, but cannot see the Wonder Twins. While both teams are in the lobby, they also comment on how they are unable to communicate with each other.

As the SuperFriends look for the Wonder Twins, the Super Friends comments on how the thief could get away with these crimes before Wonder Woman and Superman could get there. They think maybe it is teleportation.

The Wonder Twins decide to investigate.

Meanwhile, the Mirror Master is spying on the Wonder Twins.  He menacingly comments on how he has closed the barrier between the two worlds. He also reveals that it’s the SuperFriends who are trapped in the alternate reality.  Now he can keep tabs on the heroes with his Spy-Mirror. When they enter the Hall of Justice, they’ll find the clue which will lead them into a trap and steal their powers.

Back in the hotel lobby, Batman discovers from the desk clerk that the guests that were robbed all kept their valuables in their suites.  The others kept their valuables in the hotel vault.  Batman also realizes that the desk clerk doesn’t know the heroes. Before he says anything to the team, the Scarlet Speedster shows up and attempts to rob the vault.  Wonder subdues him with her Magic Lasso.  He doesn’t appear to know the SuperFriends either. But Superman confirms that it is Barry Allen in the costume.

Back at the Hall of Justice, the Wonder Twins have contacted the Flash in the JL Satellite. They inform him that the SuperFriends are missing. They were last seen entering the lobby of the hotel.  They also tell the Flash that when they arrived at the Hall of Justice, they found a recorded Troubalert message, telling them to investigate “strange doings” at the House of Mirrors at Parkside Playground.  But it’s been closed recently for repairs.  The Flash deduces that this has to be a scheme by the Mirror Master – a member of the Rogues Gallery.  He tells them not to worry about the SuperFriends, because they always find their way back.  But they need to be on the guard and wait for them, as the Mirror Master is after them now. The Wonder Twins decide to head to the House of Mirrors.

Back at the Gotham Plaza Hotel, the SuperFriends determine that they are in the Mirror World and that the Flash they captured is defiantly a villain. As the Flash is being taken away by the authorities, the SuperFriends discuss how to get back. They recall how Flash escaped, but only Wonder Woman and Superman can vibrate that fast.  So the two grab the others and tell them to hold on.  They successfully vibrate through the mirror and back to their own world arriving in the Gotham Plaza Hotel lobby.

With no hesitation, they seek out the Wonder Twins back at the Hall of Justice. As they enter, they only find Gleek. They contact the JL Satellite and speak with the Flash.  Despite his warning, the Twins took off for the House of Mirrors at Parkside.

At Parkside, the Twins find the shutdown House of Mirrors.  In order to gain access, Zan becomes a stream and Jayna a tadpole.  A security feature causes them to deactivate. As they do, multiple Mirror Masters appear. They attack the Twins, but are immediately thwarted by the SuperFriends!  As they look for the real Mirror Master, they are unaware that he is outside ready to use his Solar-Mirror Flying Pack to escape.  However, his pack malfunctions and he hears a voice in his head.  It’s Zan and Jayna.  Zan has become a bug and Jayna frost to coat his mirrors.

The Mirror Master is captured and his villainous plan is at an end!