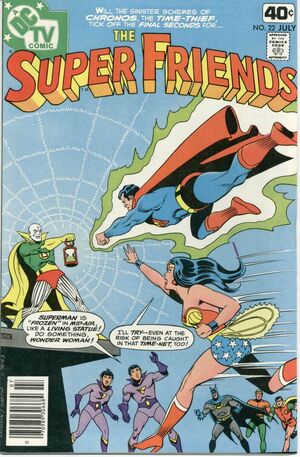 Our adventure begins at the SuperFriends headquarters in Gotham City. It's the Trouble Alert notifying them of a robbery in progress at the Gotham City Riverfront by the Matador Mob. Batman and Robin dash to the scene.

Superman and Wonder Woman remain at the Hall of Justice to explain to the Wonder Twins that although it was good that the dynamic duo was quick to respond, that not the heroes should go in case other trouble arises.

Batman and Robin arrive at a spot guaranteed to head off the Matador Mob. As they wait, a local farmer working on his fence by the road approaches the dynamic duo. Batman asks him if he's seen a group of strangely dressed individuals pass by that way. The farmer replies that he did see a group of strangely dressed city folk pass by about 30 minutes ago. Robin looks at Batman and says that's impossible, we only received the Trouble Alert 20 minutes ago. Batman says that they'll figure that mystery out later and head off to find the robbers. Batman deduces that they are probably at the private airfield just over the county line. His hunch is right and they are able to capture the criminals.

Meanwhile, a few miles away Chronos the time thief and his gang are rejoicing in there success of their time experiment. They devised a plan to blackmail Gotham City for one billion dollars.

A short time later back at the Hall of Justice, Gotham City mayor contacts the SuperFriends and explains to them the ransom demands laid out by Chronos. If they don't pay him his demand he will disrupt the town. Just then the mayor receives a bulletin that experimental missile is out of control headed towards earth. Superman jumps into action. As he arrives at the projected location over the Atlantic, he is surprised to see that nothing is happening. Just then the missile strikes next to an ocean liner. The impact is felt by Aquaman. The 'King of the Seas' is able to summon whales keep the ship afloat while it makes necessary repairs.

Back in Gotham City everything is going haywire. Buses are late. Planes are arriving late. Trains are late. Firemen are late. Its general chaos. The mayor is lost, not sure how to handle it all.

Meanwhile, Wonder Woman in her civilian identity as Diana Prince is waiting on a street corner in Gotham for her date Steve Howard. As she lingers over the thought of Steve being an over an hour late she notices in the sky the Good Time Blimp. She finds this site rather odd since the blimp is supposed to be at an airshow in Houston that afternoon. She finds a secluded place and turns into Wonder Woman using her magic lasso. Then using her mental telepathy, summons her invisible jet to investigate. At that exact moment we see Steve Howard on the same corner wondering to himself why Diana is over an hour late. Wonder Woman follows the blimp outside of town into the country. The blimp lands next to a lab that has an odd shimmering all around it. Before taking action she decides to confer with the rest of the SuperFriends.

She heads back to the Hall of Justice. Batman suggests that she has found Chronos' headquarters and Superman believes that the blimp is distorting local time.

Back at Time Thief's Laboratory, one of his henchmen informs him that Superman and Wonder Woman are converging on the lab. As his henchmen murmur among themselves he tells them to fear not because he'll just intensify the time stream around the lab.

Superman is undeterred by the strange aura and rushes in to pound on the building to gain entry. As he does so he literally freezes in mid-air. Chronos takes to his loudspeaker taunting Wonder Woman by saying that Superman could be stuck, frozen in time forever. She uses her magic lasso to pull him free. Bewildered Superman doesn't realize what has happened and questions why Wonder Woman pulled him back. Wonder Woman says that the two need to head back to the Hall of Justice and then she'll explain.

Back at the Hall of Justice, the Super Seven discuss how to defeat the Time Thief. Batman has an idea! And with that they all depart. Several events need to occur at once: Wonder Woman arrives in her invisible jet at the Time Thief Lab ready to bear down on the villains HQ. This naturally diverts the villains attention. At the same time Superman dams up a nearby stream. The Wonder Twins are also poised and ready to act. Batman is standing outside the lab with a bullhorn telling Chronos to turn off the time field. He warns Chronos that the time field is not just affecting Gotham but the whole world... Everything is slowing down. Undeterred, Chronos presses on. Just then the sensors pick up a small hummingbird outside the lab. It has begun to move very, very slow. They also detect a waterfall that is moving as slow as molasses. The time thief's gang begins to worry. Stating that now The Sun won't rise and the Moon won't set and that they'll all go mad. As they argue amongst themselves one of the henchmen reaches for time field controls and turns it off before Chronos can act. Zan and Jayna had performed perfectly! The ruse worked. Jayna as a hummingbird pretended to be moving very slow and Zan as the waterfall did the same.

The SuperFriends seeing the aura is gone, rush in and easily subdue Chronos and his henchmen.

The super seven once again saves the day and escort the criminals off to jail.

Retrieved from "https://superfriends.fandom.com/wiki/Super_Friends_22?oldid=82564"
Community content is available under CC-BY-SA unless otherwise noted.