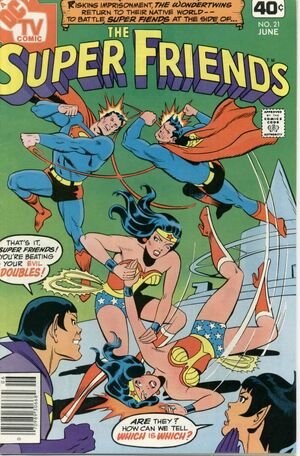 Our adventure begins with the SuperFriends investigating the landing of an alien spacecraft. Using the ‘Justice League Detectors’ they pinpoint the exact Landing location. Upon arrival they realize that it's an Exorian ship.

The SuperFriends are greeted by Illik the laughmaker who used to work at the carnival the Wonder Twins came from. He is accompanied by Exor's High Counselor,[1] Ulpar who has come to Earth seeking the Wonder Twins help.

The High Counselor explains that Exor is being attacked by two shape-shifters and former Carnival performers Yeltu and Fegla. These two had gone after Zan and Jayna when they left the carnival with the hopes of going on a crime spree with the only two other known shape-shifters. They abandon that quest when they see that Zan and Jayna, upon arrival on Earth, had been taken in by Earth's Superheroes. Heroes the two rogue shape-shifters decided to emulate. They duplicate Superman and Wonder Woman calling themselves 'Superiorman' and 'Wondrous Woman'. Now the two villainous shapeshifters not only appear to be Superman and Wonder Woman but also possess great strength in their shape shifted form.

With this reassurance the Wonder Twins agree to help and so do the SuperFriends. The Wonder Twins accompany Illik and the High Counselor while Aquaman, Wonder Woman, Batman, Robin and Gleek follow in a sealed large bubble that Superman pulls through space.

After their long journey they arrive at the Spaceport in Velthun, the capital of Exor.

They arrived in time to stop the supervillains from looting the Aluminum Exchange. The aluminum on Exor is a precious metal. Superman flies away immediately with Wonder Woman holding on. Superiorman and Wondrous Woman have a surprise for Superman - it's Kryptonite! Superman sees this ahead of time, informs Wonder Woman who attacks Superiorman. She ties him up with her magic lasso, unable to break free he becomes Yeltu again. Wonderous Woman believing she can take down the real Superman ties him up with her lasso. He easily breaks her rope and subdues the shapeshifter by melting her bracelets together and binding her wrists. With this defeat she regresses back to her true self.

The police arrive at this time along with the remaining SuperFriends. Zan comments how disappointed he is that he got to see no action. Just then Yeltu takes on the shape of Aquaman calling himself ]Waterman' and Fegla takes the shape of Hawk Girl calling herself 'Bird Woman'. The Bird Woman grabs the Waterman and together they fly to the Sea. Zan and Jayna jump into action. Jayna becomes the form of a 'Roc' (a legendary bird of prey) from the stories in an earth book she's been reading called the ‘Arabian Nights’.[2] Zan and Aquaman jump on her back and they fly towards the villains. Once they are over the shimmering see the two jump off. Zan heads for Waterman and Aquaman heads for Bird Woman. Zan forms an 'ice straightjacket' and wraps himself around Waterman and Jayna still in the form of the Roc plucks him from the ocean and delivers him to the police far from any water. At the same time, Bird Woman is attacked by Exorian Flying Fish that were summoned by Aquaman. They pluck her feathers and she falls into the sea. Just as Aquaman suspected. He believed that she could not duplicate Hawkgirl's wings or anti-gravity belt. Once the feathers were removed she would fall.

As the twice-defeated shape-shifting villains are handed over to the Exorian police, they shape-shift again. Fegla becomes Batgirl calling herself 'Capewoman' and Yulta becomes Batman calling himself 'Capeman'. This time it's Batman and Robin who jump in the action. Batman goes right for Capeman, knocking him square on the jaw. Robin employees a different tactic. Not wanting to hit a woman he uses an old trick from the Joker - laughing gas! She is overcome with laughter and is easily handcuffed. Once Batman is through giving Yulta a good bruising he is subdued as well.

Now in their original form the thrice-defeated villains are unable to shape-shift. Jayna explains that all shapeshifters have one weakness. Hers and Zan's is that they have to touch before they can change, Yulta and Fegla gradually loose their strength when taking on super forms. The two villains are arrested and taken away.

The High Counselor then approaches the Wonder Twins and tells them that he has a message for them from the Grand Rulers. "They have declared you free of your obligations to Dentwil. You may return to Earth if you choose."

Zan says that they still have more training to learn from the SuperFriends and Jayna promises to return to Exor one day.

Zan and Jayna sheepishly turn to Illik and ask if he wants his pet monkey Gleek back. Illik responds by saying he believes that he's better off with them.

And so concludes another adventure...

Retrieved from "https://superfriends.fandom.com/wiki/Super_Friends_21?oldid=82563"
Community content is available under CC-BY-SA unless otherwise noted.