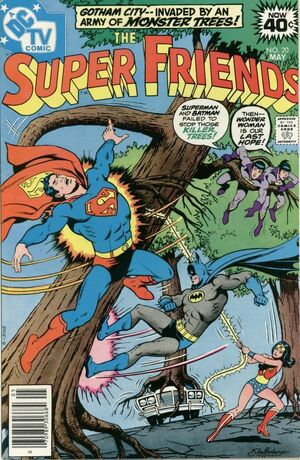 It's summer in Gotham Park and the SuperFriends are on a training tour with the Wonder Twins, Zan and Jayna.

The 'super-seven' are on a movie set, guests of the director, Frownin' Fritz Frazzle. The movie they're filming is called the "Revenge of the Leafy Monsters!" As the director emphatically explains the missed cues Robin made a strange robed figure looks on. Just then, the ashes from Fritz's cigarette drop onto the fake bombs and they explode. They don't cause any damage but they produce quite a bit of smoke. The 'super-seven' jump into action moving the cast and crew away from the danger. One of the men in need of rescue is the mysteriously robed figure. After, the 'super seven' ensures that all is well, they take off to continue their training. As the robed figure eyes finally adjust, he believes it is the director who has saved him from the smoke. He introduces himself as Merlin the Wizard. The director scoffs, saying that Merlin died over 1400 years ago.

This matters not to Merlin as he looks at the director and says that he will give him a reward. Fritz says that he's in the moving-picture business and Merlin says that he's got the perfect gift. He waves his wand and gives the director a magic lantern. The magic lantern has the power to project any drawing into a real, tangible item. As Merlin tries to explain further about the Magic Lantern, the director grabs it and runs off saying he needs no more. He returns to the cast and crew and fires them all believing that he can make the movie all by himself now. He then begins to scribble feverishly on his paper.

Meanwhile, an hour later at the Hall of Justice, as Superman is training the Twins they get a distress call on the Trouble Alert: "trees are rampaging through downtown Gotham, causing damage and menacing lives!"

As the 'super-seven' he heads out, Zan comments that nothing like this ever happened on their home world of Exor. Jayna says that's why she likes Earth, it's so exciting.

As they arrive, the SuperFriends struggle to contain the trees. Superman, Batman, Robin and the Twins divert them to a river where Aquaman where awaits. The director looks on giddy with glee. The trees enter the river and immediately suck the water up through their roots spraying it out their tops emptying the river leaving Aquaman without power. Aquaman shockingly laments, saying that Wonder Woman is now their only hope.

She uses her magic lasso around one of the trees and it comes tumbling down. Batman then surmises that they must be dealing with magic. As they fan out to look for the director they find Merlin who tells them about the magic lantern.

Batman finds a copy of the script and sees that the trees are heading for the Sawmill.

They head out to stop Mr. Frazzle. A short time later, we find Mr. Frazzle at The Sawmill preparing for his next scene when he believes he sees a second group of leafy monsters coming toward him. As he aims his magic lantern at the second group, the lantern explodes.

The 'super-seven' then jumps out of the shadows. They explain how they arrived ahead of Mr. Frazzle and how Zan had turned himself into a big mirror of ice. Batman had deduced that since the lantern made pictures real, it would make mirror images real too. So the mirror trees clobbered your trees. Wonder Woman goes on to say that Batman also figured that when the light from the lantern was bounced off the mirror, it would do what it did ... destroy the lantern!

Merlin who has arrived on the scene says that "justice is served." Mr. Frazzle begins to lament saying that he's ruined. Merlin chimes in once more and says that he shall be more careful about giving gifts in the future. He bids farewell to the 'super-seven' and disappears in the same mysterious manner that he arrived.

Superman then turns to the Twins and reminds them of what he was saying before about strength not being everything to a hero. Sometimes brains are more important. Zan then says that the best way to learn that lesson was to see a demonstration of it.

Retrieved from "https://superfriends.fandom.com/wiki/Super_Friends_20?oldid=82562"
Community content is available under CC-BY-SA unless otherwise noted.