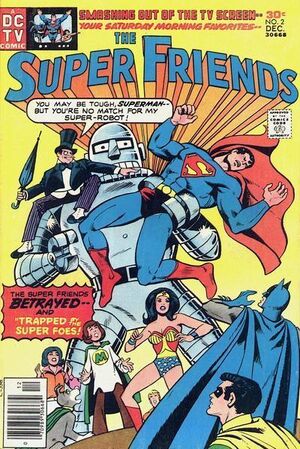 Continued from story #1 - The Fury of the Super-Foes.

Unbeknownst to the Super Friends the Super Foes have returned to the secret bases and successfully stole the parts they needed and have successfully built a Super Robot. This go-around the Super Friends attached tracking devices to the Robot parts. Batman and Robin are the first to arrive on scene to stop this new menace. Meanwhile, Wonder Woman is in downtown Gotham defeating human-size toy soldiers run amuck; Aquaman is off Leander Point defeating toy swordfish wreaking havoc on a fishing fleet and Superman is in orbit around Earth protecting the Telestar Satellite from a menacing toy. Back at the Super Foes lair, the Dynamic Duo has been captured. The Penguin is trying to get their protégés to kill them. They refuse. During this rebellion, Wendy and Marvin fight the Penguin and defeat him. Superman then shows and adds the finishing blows to defeat the Super Robot. Through this, the protégés begin to have second thoughts about their allegiances as the Penguin and the Super Foes plan comes to fruition.

Retrieved from "https://superfriends.fandom.com/wiki/Super_Friends_2?oldid=82541"
Community content is available under CC-BY-SA unless otherwise noted.