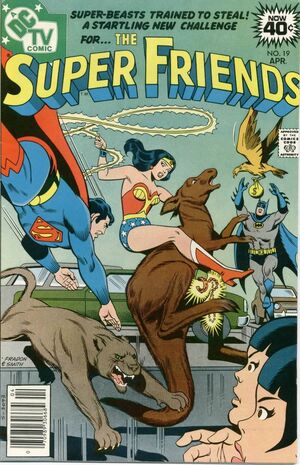 Our adventure begins in the ocean near Gotham City. Aquaman is giving the Wonder Twins their latest lessons in the use of their powers. He has summoned a few sharks for the Twins to contend with. Zan has become a wave and Jayna has become a remora. As they finish up their lesson on the beach, Aquaman explains to them that they did well but warns them of how dangerous sharks can be. As they talk, Batman arrives to take them back to the Hall of Justice for some 'scientific crime-detection.'

Upon arrival at the Academy for training young Heroes, they are alarmed to find that Gleek is not there to great them. Jayna activates her powers becoming a bloodhound. She detects the scent of bananas and together with Batman determine that Gleek was lured out at the Hall and taken away. Batman then summons the other SuperFriends (Aquaman, Wonder Woman, Superman and Robin) and tells them what happened to Gleek. Batman believes he has a suspect. He believes it was Wilson Gable (aka the Menagerie Man) who escaped from prison, just a few days ago. As the SuperFriends bring the Twins up to speed on the Menagerie man schemes, Commissioner Gordon comes through on the Trouble Alert. He tells them that he has reports of a bizarre ruckus at the Kangaroo Disco -- one involving real kangaroos. The super seven head out to thwart the scheme.

At the Disco, they find several female kangaroos destroying the place and filling their pockets with loot. Jan becomes a blizzard and Jayna becomes an orangutan and together with the rest of the SuperFriends help bring the thieving kangaroos to an end.

Back at the Hall of Justice they surmise that the Menagerie Man plans to keep them busy while he trains Gleek to do his bidding. They also believe they know where the Menagerie man will strike next -- the Annual Gotham Auto Show at the Coliseum because many of the car models have names of animals.

The following day at the Coliseum, the Twins gear up for action. Zan become a sheet of ice believing that he'll go unnoticed and Jayna become a 'flat' rhinoceros to appear as one of the displayed cut-outs throughout the Coliseum. After about 3 hours the Menagerie man arrives. Zan becomes a waterspout and Jayna becomes a full rhinoceros. As the Menagerie Man calls in his reinforcements (mustangs, flamebirds and other wild beasts), the SuperFriends arrive. As the amazing display unfolds, we find Gleek, silently moving through the crowd of spectators unnoticed stealing from their pockets. The SuperFriends carefully subdue the wild beasts. They look around for Gleek or the Menagerie man but they are nowhere to be found.

The criminal has safely escaped, back to his hideout. As the Menagerie man goes through the loot he realizes that the necklace of diamonds was wet. Its Zan! Who changes into smog, while Jayna changes into a gorilla. Just then the SuperFriends burst in having bugged one of the wallets. They easily subdue the Menagerie man.

Later, at the Hall of Justice, Gleek begins to pile up clothes and other items in front of the SuperFriends. The clothes belonged to Clark. Gleek lifted them from a pouch in his cape. He also has Wonder Woman's lasso, and has taken the dynamic duo's utility belts. Now he is begging to be fed.

The Twins angrily realize that they have another job -- get their monkey to unlearn a trick!

Retrieved from "https://superfriends.fandom.com/wiki/Super_Friends_19?oldid=82561"
Community content is available under CC-BY-SA unless otherwise noted.