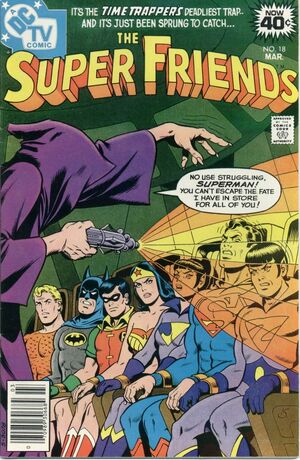 Part two of a two-issue story.

Our story picks up in Professor Nichols' Lab after the SuperFriends have saved the Wonder Twins from being displaced across space and time by the Time Trapper. While they are pleased the Twins are safe, they still must find this time-criminal who is still at large.

The SuperFriends have summoned the help of fellow hero, Tuatara (a time seer) from New Zealand to aid them in their quest. He tells that he can see that the Time Trapper left the Professor’s lab and went to three different time-eras in the past, but he does not know in which one he stayed. The first is Michigan in 1860 to the Grand Trunk Railroad. The second is Madrigal, Castile (now Spain) in 1469. The third is Atlantis in 59,600 B.C. -- approximately 50,000 years before it is destined to sink.

The SuperFriends decide to go to all three time periods. Superman says that he’ll go to Atlantis with Aquaman, Wonder Woman says she’ll take Robin with her on the Spanish mission and Batman says he’ll take the Twins with him back in time to Michigan. They all take their seats as the Professor uses his old 'time-travel hypnosis' technique and sends them back in time.

Superman and Aquaman arrive in Atlantis. They believe the Time Trapper wants to sink Atlantis before they develop the technology to create the domes they need to survive when the Continent first sunk – thus causing the virtual extinction of the modern race of Atlanteans. Just then, the ground begins to quake. Superman takes an aerial view and to his horror he sees the entire continent vibrating at a great speed. A quick scan of the continent using his super-vision confirms his suspicion. The Time Trapper has planted a device off the coast causing the massive vibrations (as a side note, this may in fact be a contributing cause to the continents eventual sinking into the Atlantic). Together with Aquaman they plunge into the Atlantic. Superman laments, wishing the Elongated Man were here to use a finger to reach through the maze of booby-trapped wires and switch the machine off. Aquaman, then uses his undersea telepathy to call someone who’ll make a fine substitute -– a pipefish! The fish successfully weaves through the maze of wires and deactivates the device. Superman then takes the device and hurls it towards the Sun, ensuring its destruction. Then, in the same manner they arrived, our heroes fade out of this time, back to late 1978

Meanwhile, Wonder Woman and Robin have arrived in Madrigal, Castile (a historical region of Spain) in October 1469. Unsure of the Time Trapper agenda, Wonder Woman brings Robin up to speed on the historical occasion of this very day. The eighteen year old Princess Isabella of Castile, wants to marry Ferdinand King of Sicily who is heir to the throne of Argon. Her brother however, King Henry IV won’t allow it. He is threatening to arrest Isabella if she doesn’t marry Alphonso, King of Portugal. At that very moment, the Princess' friend and ally, the Archbishop of Toledo is on his way with a troop of horsemen. As Wonder Woman is explaining this to Robin, an unidentified troop of horsemen arrive to arrest the Princess. After a failed attempt to use her Magic Lasso, Wonder Woman determines that since the Time Trapper is a Controller, he can animate the empty uniforms of these Knights to do his bidding, so this troop of horsemen must be his. With this knowledge, they are now able to defeat this small army. Just then, the Archbishop arrives with his troops to take the Princess to her wedding. Seeing the empty uniforms, he inquires about the mess. The Princess responds by saying she believes they were demon-soldiers sent to arrest her, but she was rescued by mysterious persons who have since vanished. The marriage of the two has been saved, ensuring the uniting of the two kingdoms into modern-day Spain and the future financing of the voyages of Christopher Columbus -- thus thwarting the Time Trappers evil scheme.

Our next adventure takes us to 1860, Michigan where we join Batman and the Wonder Twins. At the train station, they observe a young lad named Thomas of thirteen talking to the train clerk in the ticket booth. The two talking are talking about the country’s presidential candidates and praising Abraham Lincoln for his speech. They are also talking about Italy and the ideals of freedom expressed by Giuseppe Garibaldi. The Wonder Twins then turn to Batman and discuss the potential of the Time Trapper to disrupt history, concerning the young man, Lincoln and Garibaldi. Batman decides that its young Thomas the Time Trapper is after. So they board one of the train cars. They are soon confronted by the young boy who saw them enter. Batman is shocked that he was spotted. The young lad asks them what they are up to, but Jayna asks him to tell her about himself. He tells them that he prints his own paper right in this train car and sells it, and that he does some chemical experiments when he has time, but he is mainly a Candy Butcher (a seller of candy). Batman then decides to patrol on top of the train. He observes a strange mist further down the track. He soon realizes that it is destroying everything metal and is causing the tracks to collapse. He quickly summons the Twins. They activate their powers: Zan becomes a Tornado and blows the mist away, then becomes train tracks made of ice and Jayna becomes a Gramthel (a large Exxorian creature) which holds up the train as it crosses the destroyed bridge. In the chaos, a chemical placed carelessly by the young lad falls and starts a fire. Batman puts out the flames, but the Train Conductor sees the flames and blames Edison. He grabs him by the scruff of the neck and strikes the boy on the side of the head, telling him to get his things off the train at the next stop (and as history tells us, that the boxing the young man received on the side of his head, will leave him deaf in that ear). As Batman explains to the Twins that the young man was Thomas Edison, they all suddenly fade out.

That concludes our two-part adventure!

Retrieved from "https://superfriends.fandom.com/wiki/Super_Friends_18?oldid=83411"
Community content is available under CC-BY-SA unless otherwise noted.