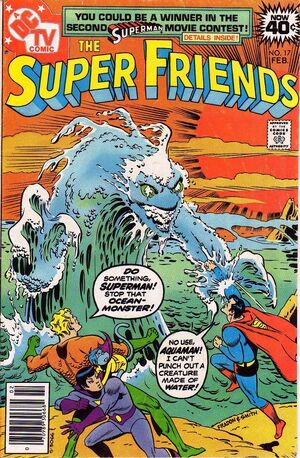 Part one of a two-issue story.

He tells them that an unfortunate explosion of his time-machine which has sent the Wonder Twins (who are charged to his care) separately through time, to two different locations –- he doesn’t know where!

The Professor tells Batman that after years of working on a top secret DNA Project, until most of colleagues were mysteriously dismissed. So lately, he has been trying to get his Time Ray back in working order. On this particular occasion, the twins were in the lab helping the professor work. Then suddenly, his invention blew up. Astonished, Wonder Woman questions how the accident occurred. The Professor tells her that it was no accident, it was sabotage!

He then shows the SuperFriends the picture he took from his labs automatic camera (aka surveillance system). Superman exclaims that it’s the Time Trapper, and Wonder Woman identifies him as the Time Master.

Realizing that they have both fought this villain before, Wonder Woman asks Superman what he knows about the mysterious perpetrator. Superman states, that he is a Controller, a superior being from another universe with the sole purpose of conquering universes. He explains further, that the Legion of Super-Heroes from the 30th century stopped one of his villainous schemes about a year ago.

Wonder Woman, believing that the best way to trace the Twins is to use the Magic Sphere on Paradise Island. So she calls her mother, Queen Hippolyte via mental telepathy. Her mother fulfills her daughter's request and tells her that Jayna is in the city of Kryptonopolis on the planet Krypton, the very day the planet exploded. The planet's, unusually heavy gravity is keeping her pinned to the ground. Zan is on a water-planet of the Star-Sun Neryla, twenty-three years in the future. The time is urgent, because the Sun is turning into a Red Giant and about to engulf the water-planet.

As they discuss their options, Batman reminds the group that Superman will be powerless on both endeavors. Aquaman believes that he’ll be best suited to help on the Water-Planet. Superman informs the group that he has been working on some new Time-Ships. Wonder Woman likes that idea, further adding that Superman should go with Aquaman and that since her powers are magical in origin (gifted by the gods), she’ll still have them on Krypton.

The SuperFriends set out to prepare the time-ships and head on their respective missions. Batman, Robin and Wonder Woman arrive on Krypton with less than an hour before the planet explodes. Batman tells Wonder Woman to hurry as the planet's gravity would crush Jayna if she doesn’t have help. The Amazon princess immediately sets out to find the misplaced teen, using her special giftedness to run as fast as she can asking everyone in Kryptonese if they have found a little alien girl. Then a Kryptonian female says that she saw the alien girl and that she seemed unaffected by the gravity. She then tells her that she was being helped by Lyla Ler-Rol, the famous actress. Wonder Woman recognizes that name, recalling one of Superman’s tales of time-traveling to Krypton’s past, to a time before his birth and how he met and fell in love with the young actress.[1]

Wonder Woman finds the house and is introduced to the actress. As Wonder Woman talks with the young lady, she is surprised to hear that she knows of Krypton’s impending doom. She believes her friend Jor-El over Krypton’s Science Council. Wonder Woman then informs her that many Kryptonians will live, those from the stolen city of Kandor and Jor-El’s son Kal-El. Astonished, the young actress remembers with fond memories her time spent with Kal-El. Wonder Woman then encourages them all to move quickly and that Lyla is welcome to join them as they head back to the future on earth. They head to Lyla’s flyer which will take them to their time-ship northwest of Kryptonopolis. At that same time, the city police are in search of the reported alien spacecraft. They believe that Jor-El is responsible (referencing Jor-El’s interference with Mon-El).

As our heroes arrive at the time-ship they are pursued by the city police because of their illegal landing. Lyla, jumps out to confront the police allowing Jayna and the heroes to escape. Jayna protests, but Wonder Woman forces her to the time-ship and they escape as the planet begins to explode.

Meanwhile, Aquaman and Superman have arrived in the future, to the water-planet, Neryla IV. As they are rescuing Zan, they are attacked by huge, menacing Water-Monster. Aquaman attempts by using his aquapathy to thwart the beast and have it turn back. His plan is successful, but is telepathically contacted by Bahom leader of the Water-People. They meet Bahom, who informs them that he knows their planet is dying and they need to be transported to another dimension so they can survive. He presents a device, that will accomplish this task, but it will not fully open and he needs their help. Our two heroes pool their knowledge together and successfully fix the device. They stay to ensure that the water-people are safely transported and then return to their ship.

Upon arrival, they are surprised to find the ships heavily damaged with limited capabilities from their skirmish with the water-beast. With the ship damaged, Superman comes up with a plan. He wants to take the time-ship into the future of this planet, long after the sun has collapsed into a 'White-Dwarf Star' will give him his powers back. In fact, they’ll be stronger than if he was under a yellow-sun. As they arrive in the future, Zan realizes that he has superpowers too. Superman informs him that people born under yellow-suns have super-powers under hotter blue and white stars. Then relays a story of how it happened to his pal Jimmy Olsen.

In this future time-period, Superman has Aquaman, Zan and Gleek use their new super-powers to push the ship toward a space-warp which is a short-cut back to Earth. After they push the ship into space and give it a super-shove towards the space-warp, they fly back inside. The ship arrives back to earth and their super-powers disappear.

Back on Earth, in 1978, the SuperFriends converge back in the Professor’s lab. As they discuss their mission, Robin excitedly states, ‘mission accomplished.’ To which Superman responds, ‘not entirely … the Time-Trappers still at large.’ The professor chimes in and says that he has also wrecked his time-machine beyond repair. Zan suggests that they use the time-ships, but Superman thinks he’d be expecting us to use some kind of machine or even his super-speed to break the time-barrier. Batman reminds them that there is another possibility – the professors old 'time-travel hypnosis' technique. The professor agrees, but is slightly hesitant. Superman then asks Diana if the Magic Sphere could spot the Time Trapper. She thinks it’s possible, but reminds them the Time Trapper has existed in so many different times, it may be difficult to tell which one he went to when he left 1978.

And with that, Superman vows that next time he’ll put him where he can’t escape.

Story continues in next issue called, Manhunt in Time!

Retrieved from "https://superfriends.fandom.com/wiki/Super_Friends_17?oldid=91693"
Community content is available under CC-BY-SA unless otherwise noted.