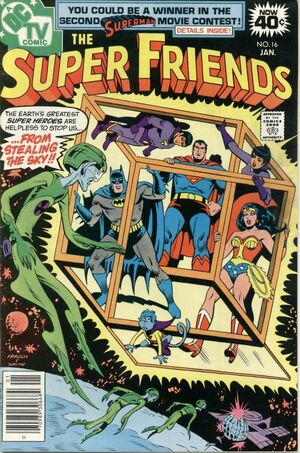 They immediately begin to construct large bizarre looking structures in mid-air! The Justice League moves slowly to intercept, until the creatures blast a passenger plane out of the sky. As Superman rushes to catch the falling plane, to his dismay he sees a military helicopter, the Batplane and Wonder Woman’s invisible jet begin to fall as well. After Superman helps the falling vehicles, he rushes to confront the aliens. His super-brain deciphers the language and he demands to speak to their leader. He tells the alien leader that they have settled in their atmosphere without permission and have knocked down their aircraft with no thought of the lives of the people inside or those below.

Pywal is unconcerned, stating that the ground-walkers are a lower form of life. And as such, he will continue to use their gravity stimulators on any machines that violate their place of habitation in the air. He then further demand that the ground-walkers shut down the factories, because they pollute the atmosphere. He gives them ‘three dawns’ to comply or he will destroy them. Superman then angrily reaches out to the alien, one of Pywal’s minions blasts Superman with the gravity simulator and he begins to fall.

He crashed into the Earth’s surface. Thankful that he still has his super-strength, he heads to the Hall of Justice. As the SuperFriends discuss their strategy, Aquaman tells the group that Green Lantern is off earth on a space-mission and Wonder Woman tells them that Hawkman and Hawkgirl are also grounded. Jayna says that since the aliens are animals, she can take their shape. They SuperFriends inexplicably and unanimously rhink it’s a good idea. Aquaman asks Superman figure out where the Gravity gadgets are by using his x-ray vision. Then Robin says that she needs to know their language. Since Superman knows their language, he tells her that he can use his super-ventriloquism (which he can project long-distances). Since Jayna is going to appear as a Cvag woman, Zan suggests that he turn into ice-crystals, similar to the ones the Cvag women where in their hair.

The pair activates their powers and head into the sky to complete their dangerous mission. Unbeknownst to the twins, there is more danger than they realize. It appears that since the Aliens machines all work on a form of atomic power that is drifting down to the earth’s surface. In time, there will be enough radioactive waste to endanger at least 90% of life on earth.

The Cvag do not suspect anything as the twins using their disguises gain access to the alien ship. While on board they change their shape into centauress and a hailstorm. They use this form to fight off the Cvag and make their way to the master control switch controlling the gravity machine. They shut it down, then destroy it.

Superman, flies toward the ship accompanied by Batman and Robin in his Batplane and Wonder Woman and Aquaman in her Invisible Jet. Since Aquaman can communicate with animals, he has a flock of Sea Birds in tow. The SuperFriends eventually over-power the alien squatters. They promise to leave earth, never return and to find an uninhabited world to rebuild their race.

Retrieved from "https://superfriends.fandom.com/wiki/Super_Friends_16?oldid=82559"
Community content is available under CC-BY-SA unless otherwise noted.