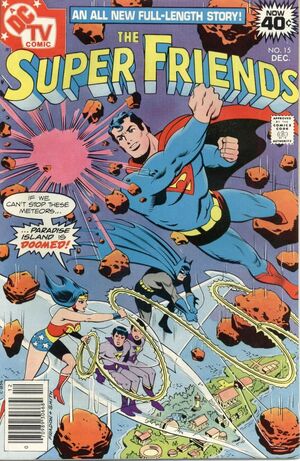 Our adventure begins at the Hall of Justice. Our heroes are enjoying catching up with the new superhero team, the Elementals (if you recall from last issue). Wonder Woman loves the new look and design. Gotham’s top fashion Ginger O’Shea (aka the Salamander) provided the design, but it was chemist, Grant Arden (aka the Gnome) who came up with the fabric. Crystal Marr’s (aka the Undine) outfit is made of mostly ‘water,’ which means it is under her control. She can change its shape ‘at will’. So, her civilian guise can change it to her hero outfit. Ginger’s out is flame-proof, but is porous. It is also quite elastic, aiding her ability to use her other powers. Grant’s uniform is made of metallic threads, so his powers work on it. Meaning it can phase through stone walls with ease. Lastly, Jeannine Gale’s (aka the Sylph) outfit is made of ‘air’, easily responding to her powers.

As they enjoy their get together, an ominous figure appears on the TroubAlert! He claims to be the mighty Overlord. Batman recognizes him as Sandor Fane. He issuing a challenge to the SuperFriends. He will strike at four spots with the four elements of ancient times (remember from last issue it was Sandor who was behind the merging of the elemental-spirits with four human hosts). He starts off by chastising Bruce Wayne for funding the Elementals and because of that he will flood the new Wayne Petroleum Complex in West Texas. The Overlord then says he destroy the City of Poseidonis in Atlantis with a rain of fire. He will then destroy Paradise Island with falling rocks. Lastly, he says he that he will destroy the JL Satellite with strong winds. As the face fades on the screen, they are perplexed at how the Overlord will flood that part of Texas, or get fire under water or have rocks fall on the hidden Paradise Island or wind in space.

As Robin and the Sylph arrive, they find that the flooding has begun. The Sylph is having no problem handling the flooding. She simply freezes the water. Our fearless Teen Titan, on a hunch, heads to speak with the superintendant. After looking at the plans for the complex, it turns out his suspicions were correct. Someone made some unauthorized changes and rigged the water tanks to expel, causing what appears to be great flood. Robin heads over to the part of the complex and finds the culprits messing with the tanks. As a trained combatant, he easily subdues the criminals.

As we check in with Aquaman and the Undine under the Atlantic, we find the famed city is indeed under attack by fire. Aquaman believes that there is only one answer, ‘Greek-Fire’! He explains that the Greeks used it against the Saracens in A.D. 673. It is a liquid that bursts into flame on contact with water, but the secret was later lost.[1] The Undine then controls currents to divert the fire from its target. Aquaman sets out to find its source. He finds a ship with pipes extending far over the side into the water. Using his super-human (ala Atlantean) strength to bend the pipes upward. He then telepathically sends dolphins to leap over the side of the boat and strike the nefarious men.

In another part of the Atlantic Ocean, the Amazon princess and the fiery fury spot the next threat. They come across the meteor shower, but it is miles from her homeland. As they fly through it, she realizes that it is the falling meteors are covering several square miles, so the location of the Island must still be a secret. The Salamander asks how the princess plans to combat this threat. She replies by saying the same way her Amazon sisters are, by using her plane and powers. As Wonder Woman does her thing, the Salamander grows to an enormous size and easily catches the falling stones. She even flies, high in the sky but cannot go high enough as the falling stones are coming from far into space. Without oxygen, she cannot use her ‘flame-powers’. She prays that her friends can find the cause and stop it.

At the JL Satellite, Superman is perplexed by how the solar-winds (streams of charged particles emitted by the Sun) are being magnetized to their Satellite HQ. As he searches for an answer, the Gnome keeps the Satellite in orbit with his magnetic powers so that it does not fall to earth or the Sun. As a metal made from earth, the Gnome realizes that the satellite falls under his protection. While flying into space, searching for the cause, Superman comes across a new satellite that has only been in orbit a few weeks. He finds that it is both distributing the solar winds and sending meteors to earth. As he destroys it with one pinch, he thinks to himself that this satellite must have cost the Overlord millions of dollars and months of preparation.

As we check in with Batman and the twins, they have just arrived at their destination – a castle, in America bought by Sandor Fane. To get over the moat and scale the high door, Jayna becomes a giraffe. Once over, Jayne becomes a canary. Zan morphs into a mist, so as to not set off any traps. As they move forward, the are greeted by the Overlords, small army. Jayna morphs into a Triceratops and Zan becomes Jack Frost easily freezing the weapons of his opponents. Once the Overlord’s henchmen were defeated, they race to find the Overlord. As Batman rushes into the ‘mock throne-room’ the Overlord is surprised and overtaken. As Batman takes him into custody, he tells him that his reign is over. The Overlord scoffs at that, saying his organization will spring him.

Unbeknownst to Batman, in the shadows, lurks the Overlord’s Underling. The Underling laughs at the Overlords final refrain and gloats that everything is going according to plan -- for it was he who crafted the Overlord’s ideas and whispered them into his ear while pretending to be his servant. He only needed Sandor for his money. In fact, Sandor trusted him so much, that he had his Underling handle everything, include his money. The Underling used the money to build an organization for himself and then stole the rest for himself, leaving Sandor penniless. He then sits on the throne Sandor had set up and calls himself the Overlord!

Retrieved from "https://superfriends.fandom.com/wiki/Super_Friends_15?oldid=82558"
Community content is available under CC-BY-SA unless otherwise noted.