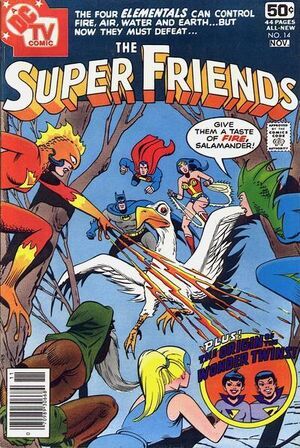 Our adventure begins at fabulous Carousel Restaurant in the Wayne Building. Bruce Wayne is present at a dinner party. At his table is Sandor Fane (who was also born to wealth), Crystal Marr, Jeannine Gale, Ginger O’Shea and Grant Arden. Over the course of conversation, Sandor (or Sandy as Bruce calls him), brings up the ancient 16th century alchemist, Paracelsus. Sandor is fascinated with Parcelsus’ intrigue with the spirits the inhabited the four elements: the ‘spirit of Gnomes’ in the earth, the ‘spirit of Undines’ in the water, the ‘spirit of Sylphs’ in the air and the ‘spirit of Salamanders’ in fire. He goes on by stating that he has acquired a previously unknown writing that says that Paracelsus had found ways to summon the elemental spirits. Bruce excuses himself from the table stating he has previous engagement – to patrol the streets of Gotham as the Batman! He swiftly heads to a secret batcave beneath the Wayne Building to begin his patrol. The young lady’s comment at that the table that it could be another girl, especially after Silver St. Cloud turned him down.[1]

The following morning, strange objects begin to appear all over the world. Aquaman spots a gigantic deep blue sapphire on a beach not far from Aquaman’s undersea home. Wonder Woman in her stomping grounds, finds a huge sparkling diamond next to the U.N. Building in New York City. Batman finds a blood-red ruby at Gotham City Police Headquarters and Superman comes across a shimmering green emerald atop the Galaxy Building in Metropolis.

The green emerald cracks open to reveal a diminutive, seemingly elderly man who claims to be the Gnome, master of the earth, who’s strength is invincible. He uses his transmutation power to transform the emerald into Kryptonite, overcoming Superman.

Meanwhile… the Sea-King has his hands full. A woman emerges from the giant sapphire claiming to be the Undine, a greater sea-ruler than even Aquaman.

Meanwhile… the Amazon battles the Sylph, mistress of the air.

Meanwhile… Batman is greeted by the Salamander! She is keeping Batman at bay by projecting fire at him.

Back at the Hall of Justice our Jr. SuperFriends, Robin, Zan, Jayna and Gleek are growing concerned as they watch on the monitor. Zan and Jayna activite their powers before they depart to help. Jayna becomes a Thrib (an Exorian creature with hypnotizing powers) and takes off to help Wonder Woman in New York. She drops Gleek off to help Aquaman. Robin jumps on his R-Cycle and heads ‘across the bridge’ to Metropolis to help Superman and Zan heads over to help Batman.

Upon arrival, Zan morphs into a wave of water to put out the blazed Salamander. It worked, knocking her out cold. As he pulls off the mask, he is shocked to see Ginger O’Shea. Robin arrives and aids the subdued Superman, by using knock-out gas. When he pull off the mask, Robin is surprised to see Grant Arden. This happens with our other heroes too. Wonder Woman and Jayna discover Jeannine Gale under the Sylph mask. When our Heroine confronts the girl, she denies being Jeannine, but says that she is inhabiting her body and that she was told Wonder Woman was a criminal.

As Gleek distracts the Undine, now morphed into a gorilla, Aquaman is able to use his Aquapathy to call for help. When he does, he also reaches into the mind of the Undine, because it is of the sea. It grows confused by the presence. She realizes that she he has been deceived and reveals herself to Aquaman.

A short time later, the Elementals meet the SuperFriends at the great hall. They reveal to our heroes that they are ‘elemental spirits’ who now co-inhabit the bodies of four humans, how they were summoned by the Overlord and given these forms. They were told the SuperFriends were evil, needing to be destroyed. The Elementals, desiring to gain a soul agreed to the task. (NOTE: Elementals can gain a souls and thus prolong their 300 year life cycle if they obtain a human-body and either marry of do good over a long period of time.)

The SuperFriends recall their confrontation with the Kingslayer and how, once captured, could not really tell them anything about the Overlord. They ask if they could speak to the Elmenatals’ human counterparts. The Elementals comply. In their human form, they tell of how Sandor Fane summoned the Elementals but didn’t tell them that they have their bodies inhabited.

Batman then deduces that Sandor Fane is the Overlord. 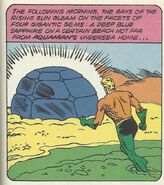 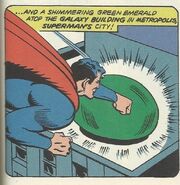 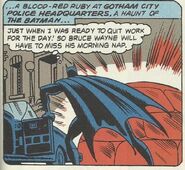 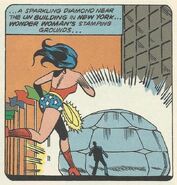 Wonder Woman meets the Sylph
Add a photo to this gallery

Story Two: The Origin of the Wonder Twins

The SuperFriends and their new allies the Elementals, relax in the Hall of Justice, talking about the recent misunderstanding and debate the desire to give up their powers. The SuperFriends unanimously agree that they have never destined that. However, the Wonder Twins tell a different tale which involves the secrets of their origin. It would appear that Zan and Jayna were born mutants on the planet Exxor at a time when this was no longer the norm. Each of them gifted with a specified aspect of shape shifting. While still infants, a great plague swept across Exxor killing hundreds, including their parents. Since no one on Exor wanted mutant children, the twins were raised in an interplanetary circus until such time that they came of age (which is 20 years of age). While their they cared for Gleek. As they grew to adolescence, they became frustrated with the enslaved life of a carnival performer, so they flee to Exxor and land in the remote region called the Fejanian Wilderness. While their, they overhear Grax , a supervillain mking plans to defeat Superman and his Super-Hero friends. So they travel to Earth to warn the heroes and eventually aid the SuperFriends in battling the forces of Graxv -- and you know the rest.[5] As they conclude their story, they say the best part is that they no longer hate the powers that once made them freaks and outcasts on Exor. And one day, maybe, they'll go back to Exor to become the planets Super-Heroes.

Retrieved from "https://superfriends.fandom.com/wiki/Super_Friends_14?oldid=82557"
Community content is available under CC-BY-SA unless otherwise noted.