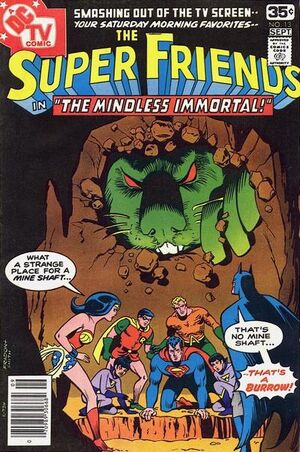 Our adventure begins where our last adventure left off.

The last we heard of the SuperFriends they were receiving an unexpected message from Doctor Mist. He explains to the SuperFriends, how a giant mole creature, the last of its kind was harmlessly burrowing within the earth, when he encountered a chamber called the ‘place of life.’ In that chamber, the mole was bathed in a multi-colored flame called the ‘spirit of life’ becoming immortal and more ferocious. Everywhere it went, destruction followed. Doctor Mist pointed out that the creature was not evil or violent but virtually ‘mindless’ and unaware of its destructive force. He also told the SuperFriends that he has calculated that it will move east and surface at three points: Death Valley, Grand Canyon and Carlsbad Caverns. He tells them that once they capture the creature, they must bring it to his home on the east coast of Africa.

Wonder Woman and Robin head to Death Valley; Superman and Aquaman head to the Grand Canyon and Batman and the Wonder Twins head to Carlsbad Cavern. Try as they did, Wonder Woman and Robin fail to stop the mindless beast. Amazed at its strength, it eludes Superman and Aquaman too. Batman, believing that the creature is lonely, has Jayna turn into exact duplicate of the Mole Creature. The ruse worked.

They take the creature to the home of Doctor Mist, marked by the great stone head of the Doctor, carved into the side of the mountain. Upon arrival, he tells them that their task is not yet complete. They must take the creature back to the ‘place of life’ and make sure that it takes a second bath in the flame which will undo the effect of its first venture through. The place of life is up the river, lies a city in the crater of a dead volcano. Underneath the city, deep in the ground lies the fabled place of life.

Once in front of the flame, they are all mystified by its presence and allured by its potential gift. Superman, desires to enter the flame, but musters the strength to resist its temptation and throw the giant mole into it instead. Now the mole will live out its days normally, not venturing to far from home.

And that concludes this adventure, but it is the first of many to come with Doctor Mist!

Retrieved from "https://superfriends.fandom.com/wiki/Super_Friends_13?oldid=82556"
Community content is available under CC-BY-SA unless otherwise noted.