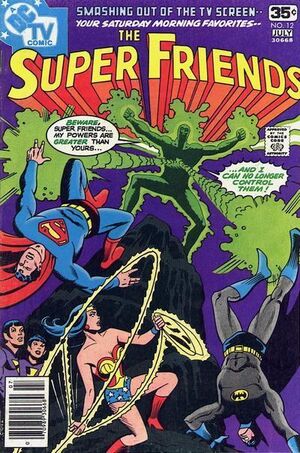 Our adventure begins at the Hall of Justice where Robin is training Zan and Jayna in the art of boxing. Aquaman interrupts the training session by notifying the SuperFriends of a Troubalert Call.

The ‘Super Seven’ are told that two World War II heroes, Thomas ‘Tex’ Thomas (aka T.N.T.) and Danny Dunbar (aka Dan the Dyna-Mite) were contacted by the F.B.I. years ago about their studies in atomic energy and asked to participate in something called the Manhattan Project (the development of an atomic bomb). This experiment caused their powers to become unstable, which created the need for isolation from each other and the world. They are being contacted, today because that morning, a huge quake broke apart the bunkers that T.N.T. and Dyna-Mite were staying. Now these two super-charged heroes are on the loose and heading in the opposite direction from one another. Needing to be apart T.N.T headed north to the Rockies and Dyna-Mite South to the Gulf of California. Their state-of-mind is in question, so they could be dangerous.

Superman, Batman and Wonder Woman with Gleek go to the Rockies, while Aquaman, Robin, and the Wonder Twins head to the Gulf of California.

On the way to the Gulf of California, Jayna provides the transportation by becoming a Quetzalcoatlus (a Pterosaur, colloquially referred to as Pterodactyl). On route, Aquaman's one hour time limit for was fast being out of the water, was approaching and he was getting weak. So Zan turned into a raincloud to refresh Aquaman.

In the Rockies, as Batman approached T.N.T, an atomic blast was shot at him, but Wonder Woman deflected it with her bracelets. When Superman approached T.N.T, he again emitted a blast. T.N.T explains that this was uncontrollable and that he was not trying to hurt anyone. He also explains that he did not break-out of his bunker. Rather a strange 'giant mole' was digging between the bunkers and caused the minor quake, releasing himself and Dan. Realizing the potential danger of being in close proximity to one another and creating a nuclear explosion, both men decided to go their separate ways.

Superman decides to take T.N.T to a scientifically advanced city and Wonder Woman, Batman and Gleek head-out to warn the other SuperFriends that Dyna-Mite isn't purposely trying to attack them. They hope to make it in time.

Aquaman and Robin approach their adversary and try to stop Dan Dunbar. He shoots an atomic blast to keep everyone away. Zan turns into a wall of water in order to prevent the atomic energy from leaking out. Aquaman sensed that there wasn't any big sea life nearby to incapacitate Dunbar, so Jayna volunteered to turn into whatever was needed. With Aquaman’s help, Jayna turned into an elephant seal. Following Aquaman's instructions, she dives deep into the water several times, creating big enough waves to knock out Dan Dunbar. Wonder Woman and Batman arrive and inform Robin of the mis-information.

Aquaman wants to take Dan to an isolation chamber in Poseidonis. Wonder Woman used her magic-lasso as a ladder to transport Dan, since it couldn’t be affected by his atomic energy. Aquaman telepathed ahead to make sure that there was a suit ready to protect Dan underwater and to protect others from his atomic powers. Dan inquired if Atlantis had the scientific know-how. Aquaman assured him stating that Atlantis indeed has the scientific ability to cure him. In fact, before Atlantis sank 11,600 years prior, the Continent was the most scientifically advanced in the world. A half an hour later, Dyna-Mite is in a lead-lined, isolation chamber. The Atlantean scientists tell Aquaman that he’ll be safe in the chamber. Aquaman promises to check on him from time to time.

Meanwhile, Superman has brought T.N.T to his Fortress of Solitude. He shows him the shrunken city of Kandor and gives T.N.T a suit to wear and together they head into the city for help. T.N.T asks why he needs to where this suit if the Kandorians were Kryptonians like Superman. Superman explains in the bottled city, the atmosphere is like it would be on Krypton. So they would have no super powers and thus, no way to be protected from his atomic radiation.

Upon arrival in Kandor's laboratory, Superman introduces T.N.T to two brilliant scientists, believing that they would be able to solve T.N.T 's radiation problem. One of the scientists was Van-Zee, Superman's cousin. The other is Ak-Var. Together they are the 'Dynamic-Duo of Kandor' -- Nightwing and Flamebird.

A week later, the SuperFriends are at the Hall of Justice, still baffled over the giant mole creature that destroyed the bunkers. Superman said he believes that he saw the creature briefly in a battle with the Parasite. As they discuss the mystery, Doctor Mist appears on the Troubalert Monitor and tells the SuperFriends that he could tell them about the creature.

This mystery will be revealed in the THE MINDLESS IMMORTAL, part 2 in our exciting adventure. 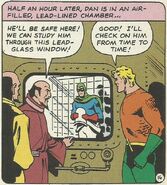 Lab in Kandor
Add a photo to this gallery

Retrieved from "https://superfriends.fandom.com/wiki/Super_Friends_12?oldid=82555"
Community content is available under CC-BY-SA unless otherwise noted.