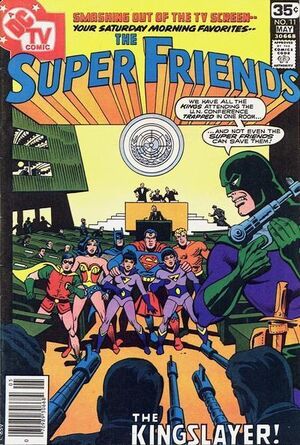 Our adventure starts with a villain calling himself, the ‘Overlord.’ He is paying an assassin known as the Kingslayer (known for political assassinations).

U.N. employee, Diana Prince gets a phone call from S.O.S. Agent, Steve Howard. He tells her that S.O.S. received a tip that one of the ‘heads of state’ will be targeted for assassination as they come to New York for the U.N. Conference tomorrow. While not knowing who is behind the planned assassinations, Howard identified six heads of states that do not have adequate security. Diana, as Wonder Woman takes this information back to the Hall of Justice. The core-five SuperFriends are there (Wonder Woman, Batman, Robin, Superman and Aquaman) along with the Wonder Twins and Gleek. Together, they attempt to contact the other Justice League members for help, but they are away on missions. They decide to enlist the aid of the Wonder Twins to help protect the heads of state.

Wonder Woman relays to the SuperFriends the six leaders in need of protection. They are: Prince Mark of Sardonia; King Vulko of Atlantis; Princess Evalina of Valdania, Prince Ali of Kaliph, Queen Astrid of Graustania and chief Solovar of Gorilla City. Each SuperFriend chose a leader that they met at least once. Aquaman takes his friend Vulko of Atlantis, Robin takes Princess Evalina (recalling a meeting with her and Batgirl), Batman takes Prince Ali, Wonder Woman takes Queen Astrid and the Wonder Twins are assigned Solovar.

It turns out that the Kingslayer had in fact set traps for each unprotected leader.

In the Subway system under NYC, Batman and prince Ali were disguised, but so was Kingslayer who had found his target. A blast from a "camera" placed Prince Ali in the path of a Subway Train. A disguised Batman jumped into the trains’ path and with an amazing, super-heroic leap grabbed Ali and jumped onto the front of the moving train.

In a cab the Wonder Twins and Solovar were talking about the twins amazement with the advanced race of gorillas and their unique place on earth. The cab driver suddenly jumps out of the cab and the sides started to close in, being crushed. The Twins used their powers to bust up the booby-trapped cab and save chief Solivar.

As Robin and Princess Evalina head to her hotel room, the paparazzi shows surrounding them. Someone had tipped them off. The distraction allowed Kingslayer to throw a grenade. Robin caught it and noticed it was giving off a possibly poisonous gas. Robin located an unoccupied rooftop from which he tossed the grenade. He then quickly took Eva to her hotel room.

Aquaman and Vulko, already at Vulko's suite; marveled at the extravagance. Aquaman told Vulko that this was normal in order to impress visiting royalty. Because they had both been out of the water for nearly an hour, they started showing signs of exposure to the air. Aquaman tried the shower but it was booby-trapped with a stream of fire, nearly incinerating him. Aquaman then found a sink, determined that it wasn't tampered with and used the water to renew themselves.

Finally, while Superman and Prince Mark were in another hotel suite, room-service delivered a bottle of champagne directly to Prince Mark. The room-service waiter ran out before waiting for a tip. When the prince opened the bottle, it exploded. It turns out that it was Superman in disguise. Superman used his x-ray vision to detect nitroglycerine in the bottle. Superman, takijng advange of the explosion, told the prince to lie low so that the "killer" would think he is dead. Superman then disguised the prince as Clark Kent (Superman's secret identity) and went to hide out in Clark's hotel room.

The Kingslayer now believes one assassination attempt was successful.

Back at the Hall of Justice, the SuperFriends compare notes and determine that the assassin's plan was to divert attention with the six attacks from his real plan – kill over 100 of the world’s leaders at U.N. Conference!

Prince Mark shows up and says thanks to the SuperFriends, he was not killed. He then told his fellow leaders not to sit down yet. Superman and Wonder Woman explained why. The chairs were receiving an electrical current that would prove fatal, the microphones were set to release a poisonous gas and the overhead lights had deadly heat waves installed which would melt a chair. The Kingslayer then jumps out with numerous snipers. The SuperFriends (and Wonder Twins) jumped into action and took out all of the gunmen.

Batman muses that they don’t really know who hired the Kingslayer. Wonder Woman suggests using her Lasso of Truth but knows it may not hold up in court. Robin thinks they should do it and worry about legalities later. Zan wishes that Gleek could have joined them in New York and Jayna admitted that Gleek would have liked meeting King Solovar.

And with that, the adventure is over. Yet, we know that the SuperFriends will hear from the Overlord (the Kingslayer's mysterious benefactor) again.

The Heads of State:[1] (Only Appearance)

Retrieved from "https://superfriends.fandom.com/wiki/Super_Friends_11?oldid=82554"
Community content is available under CC-BY-SA unless otherwise noted.