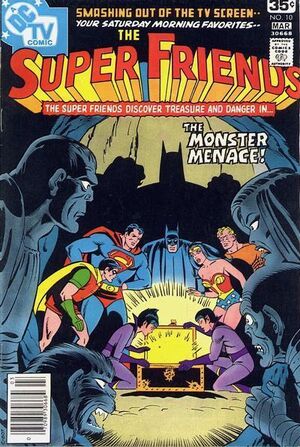 The Wonder Twins move in with Carter Nichols who becomes their mentor in order to help them live life on earth. Meanwhile, the Super Friends encounter a group of mysterious monsters who are after two treasures!

Our adventure begins with our ‘new’ Jr. Superfriends, Zan and Jayna. Batman, Superman and Wonder Woman are making arrangements for the twins to stay with Professor Nichols (brilliant scientist and old friend of Batman, Robin and Superman).

Since the teens do not speak English very well, they ask if they can speak in Interlac. As they speak in this inter-galactic language, they thank Superman for the ‘new’ emblems on their uniforms which are the first letter of their names in the English. Superman tells them that since they liked the look of ‘S’ symbol so much, he thought they should have them since they are training to be super-heroes.

Batman is discussing with the Professor the teens ‘new’ secret identity. The Professor’s idea is that they “are from a small European country. That way, the difficulty in speaking English will seem natural.”

Wonder Woman then gives Jayna, Wendy’s old ‘signal charm bracelet.’ On it there is way to contact the ‘core-five’ SuperFriends at any time. Wendy wanted her to have it. Jayna happily accepts.

Outside of Gotham City in the open-countryside, Zan and Jayna are studying animals, as Jayna’s power requires that she be familiar with Earth’s creatures. When suddenly, the Wonder Twins find a beautiful woman being chased by what appear to be monsters from Earth's old horror movies (traditional movie monsters). The twins come to the aid of the young lady. Zan takes the form of a tornado and Jayna the form of a horse. Jayna tells the young woman to get on and Zan whirls them to the Hall of Justice. There they contact the SuperFriends using the ‘signal-bracelet’. The young lady identifies herself as Cherry Mott. She mentions that the teens are not the teens she’s seen with the SuperFriends (referring to Wendy and Marvin). She goes on to tell them that she needs help retrieving her inheritance left by her late grandfather, and that the monsters were probably sent to get the treasure before she could claim it. The SuperFriends have since arrived, and are told that one treasure is hidden in the 'Black Caverns' and the other is in 'Barracuda Deeps'. They split into two teams: Batman, Wonder Woman, Robin and Gleek to Black Caverns and Superman, Aquaman, Zan and Jayna to the Barracuda Deeps.

At the Black Caverns, four of the "creatures are there". Batman and Robin battle the two Vampires and Wonder Woman takes on the werewolf and the mummy. Once the monsters are defeated, they take the ‘yellow ring’ Gleek found and their prisoners back to the Hall of Justice.

Meanwhile, out of the vast ocean; Superman, Aquaman, Zan (a wave) and Jayna (a swordfish) are arriving at the Barracuda Deeps. They quickly encounter three more of the creatures. The creature that looks like Frankenstein's Monster battled Superman. He also fought, what appeared to be an undead sorcerer with "green magic" and Aquaman fought a "fishman" similar to the Creature from the Black Lagoon. Again the monsters are beaten, and the heroes find a golden lantern. Together they head back to the Hall of Justice with their captives and treasure.

Back at the Hall of Justice, the heroes arrive to a grateful Cherry, but Superman is curious given the combination of a ring with a lantern. He uses his X-Ray vision to check under the cloak of one of the beings and realized that he and his fellow-heroes were being played for fools because the cloaked sorcerer was a Green Lantern. The alien Green Lantern was surprised to see that this team of heroes friends of this planet's Green Lantern. He said that he was cloaked because he didn't know who on Earth would be after this great power.

The alien Green Lantern revealed that his friends were all heroes and they introduced themselves through Interlac. The one that appeared to be ‘Frankenstein’s Monster’ was a hero called ‘Superior Man’. The ‘werewolf monster’ was called ‘Fangclaw’. The ‘Mummy’ was called ‘Stretch Man’. The ‘Creature from the Black Lagoon’ is dubbed ‘Subsea Man’. And the ‘vampires’ were a hero-couple called ‘Batman’ and ‘Bat-Woman’.

The woman turns out to actually an alien criminal named Char Ymat, not a feigned ‘damsel in distress’ as she led them to believe. She emerges from the shadows wearing the ring and explains that the Green Lantern Power Ring and its battery were disguised with a gold covering and were once the property of a renegade Green Lantern who became a criminal – the famous war-criminal Sinestro! When he determined to use his powers for his ‘own gain’ he took a precaution. While the Guardians on their planet Oa were cut off from the rest of the galaxy during an Ion Storm, he stole a ring and created a duplicate Lantern from the reserve supply and took the items across the vast reaches of space and hid them in another space-sector on the planet called Earth. He then encased them in gold, so the Guardians could not trace them. Unbeknownst to Sinestro, at the same time the Ion Storm was occurring, Abin Sur (this sector’s Green Lantern) was dying and passing his ring onto an earth-man.[1] Sinestro never bothered to return for these items because the Guardains had banished him to the planet Qward in the Antimatter Universe. And by the time he escaped, he had created a new Yellow Power Ring.

Ymat then attacks, and while the villainess proves resourceful, she is not familiar enough with the rings power and two super-hero teams. The other Green Lantern promised to take the stolen ring and lantern back to the Guardians and with that they departed on friendly terms.

Zan comments that he and Jayna learned that the supposed ‘monsters’ were the true heroes and that the beautiful woman was the true monster. Robin confirmed, stating that they all should remember never to “judge by appearances!”

The Justice League of Another Planet 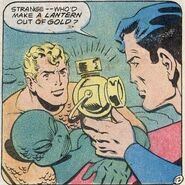 Retrieved from "https://superfriends.fandom.com/wiki/Super_Friends_10?oldid=82553"
Community content is available under CC-BY-SA unless otherwise noted.