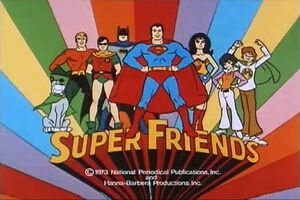 “Super Friends” was the first season of the SuperFriends series.

SuperFriends debuted on the ABC Network on September 8, 1973 on Saturday mornings in the 9:00 AM timeslot for 60 minutes.

In addition to the superheroes, eager young hero trainees Wendy Harris, Marvin White, and Wonder Dog (who interestingly could 'reason' and 'talk') were along for adventures. Inspired by the Scooby-Doo gang, the trio—or at least its human members—were depicted as detectives and/or superheroes in training.

Their base of operation was called the Hall of Justice, where they responded to TroubAlerts and information supplied by Colonel Wilcox (a government liaison to the SuperFriends during emergencies).

Conflicts are often ultimately resolved with the antagonists persuaded to adapt more reasonable methods to achieve their aims with the assistance of the heroes. Natural disasters triggered by human (or alien) activity were often shown, and environmental themes featured strongly in the program.

This season also included occasional cameos by other heroes like Plastic Man, Flash and Green Arrow.

This first run of Super Friends, consisting of sixteen one hour episodes that were rerun several times, concluded on August 24, 1974. At this point, the series was cancelled and did not appear on the fall lineup for 1974.

However, interest in superheroes among ABC's prime time viewers, especially with the success of The Six Million Dollar Man (January 18, 1974 – March 6, 1978) and the live-action Wonder Woman series (November 7, 1975 – September 11, 1979) caused the network to pursue reviving the Super Friends.[1] To begin with, the original sixteen episodes of the series were rebroadcast as a mid-season replacement, running from February 7, 1976 to September 3, 1977.[2] These episodes were edited to half-hour versions. In the meantime, Hanna Barbera began production on a revamped version of the show.

This series aired in reruns the following season in 1974, this time at 11:00 AM. The series was dropped from the Saturday morning schedule in 1975, but returned in the fall 1977. This time, it only ran for a half hour. The 16 existing episodes were now divided in half and ran in 2 parts. They would later air this way in syndication weekday afternoons in the 1980’s.

Cast in all Episodes

Retrieved from "https://superfriends.fandom.com/wiki/Super_Friends_(Season_1)?oldid=85820"
Community content is available under CC-BY-SA unless otherwise noted.