Start a Wiki
The 'Super Enemies' 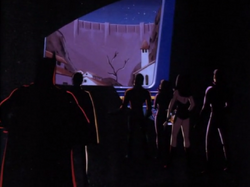 The Super Enemies are evil counterparts of the SuperFriends from a parallel universe.

Instead of doing heroic deeds, like saving a village from being flooded by a dam, they would break the dam open more, so as to destroy the village.

The Super Enemies have no morals. They are evil incarnate.

There were at least two parallel-universes where there were evil counterparts of the Justice League of America.

The oldest of these was Earth-Three,[1] which had a group of five villains that went by the name Crime Syndicate of America. Having different names (Ultraman, Owlman, Super-Woman, Power Ring, Johnny Quick) from their Justice League counterparts they eventually discovered the existence of Earth-One and Earth-Two, and set out to challenge the JLA and JSA to a lengthy fight, after which the Syndicate was ultimately defeated, the JLA tricking the Syndicate members into unleashing more power than they could control after they had captured and imprisoned the JSA. Following this defeat, they were imprisoned in an unbreakable bubble generated by Green Lantern's power ring, and placed in a "limbo" dimension between the Earths with multi-lingua signs warning nobody to release them. Over the following years, the Syndicate or one of its members would occasionally escape and attempt to wreak havoc on Earth-One and/or Earth-Two. Earth-Three's history was "reversed" with Lex Luthor being its only active superhero.

The second parallel-universe is Earth-148.[2] Unlike Earth-Three, its history wasn't "reversed" though the roles of heroes and villains were. Heroic versions of Lex Luthor, Clayface, and the Rogues battled evil versions of Superman, Batman, Flash, and Wonder Woman. Wonder Woman was the only one of these who actively traveled to Earth-One.

Their headquarters is the Hall of Evil.

Retrieved from "https://superfriends.fandom.com/wiki/Super_Enemies?oldid=85595"
Community content is available under CC-BY-SA unless otherwise noted.