Speedy was the teenage sidekick of Green Arrow back in the '60s. He was also a member of the Teen Titans.

In the parallel universe of Earth-One, Roy Harper's parents, Roy[2] and Anna were both killed when an experiment by his scientist father exploded. This was in the wilds of Arizona. Roy was found by Indians and brought up by Chief Thunderhead, a great archer who could do many fantastic things with a bow and arrow. He trained the boy in their use. Later, he told Roy to seek his future with the great archer, Green Arrow. The Chief is now dead.[3]

A few years later, after the original Titans disbanded, he joined a band called Great Frog and eventually became a drug addict.[5]

A few years after that, he rejoined the 're-formed' Titans ready to fight crime.[6]

Speedy did not appear in any episodes of the Superfriends. 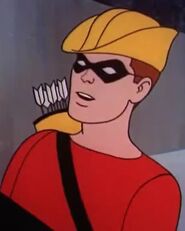 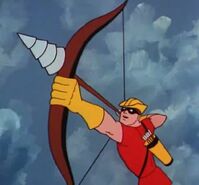