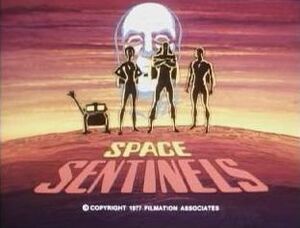 Space Sentinels (originally titled The Young Sentinels and renamed midway through its only season) is a Saturday morning cartoon produced by Filmation which debuted on the NBC network on September 10, 1977 and ran for thirteen half-hour episodes. The series has been called "ahead of its time" due to its racially diverse cast of main characters.

In this series, the Roman mythological figures Hercules and Mercury are joined by Astrea, to form a superhero team to protect mankind in the then future year of 1985.[1]

Although this series only had one season, a spin-off was developed for the Tarzan and the Super 7 animated series the following year, called The Freedom Force. Both of these shows were released together on DVD.

The back-story of the three heroes is explained in the opening narration of the series:

BCI Eclipse LLC (under license from Entertainment Rights) released all 13 episodes of Space Sentinels on DVD in Region 1 on August 22, 2006, along with all five episodes of The Freedom Force. This series featured the character Hercules and which originally aired as part of Tarzan and the Super 7. In addition, the digitally-remastered presentation features scripts and Spanish language tracks for all 13 episodes, audition tapes, a gallery featuring original images, early presentation images, trivia and interviews with creators Lou Scheimer, Buzz Dixon, Darrell McNeil, Michael Reaves, Robert Kline and David Wise.

Retrieved from "https://superfriends.fandom.com/wiki/Space_Sentinels_(TV_series)?oldid=91671"
Community content is available under CC-BY-SA unless otherwise noted.