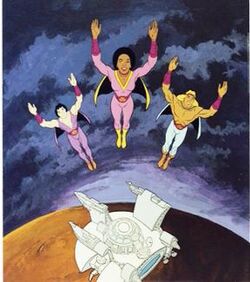 The Space Sentinels were young Earthlings, selected from their native lands and transported to Sentinel One's faraway world. While there, they were granted astounding powers, and eternal youth, then returned to Earth.

Their mission: to watch over the human race, helping the good in it to survive and flourish. In the course of history, their names have become legend:

These eternally young, teenage guardians form the greatest team the world has ever known, the Space Sentinels.

Retrieved from "https://superfriends.fandom.com/wiki/Space_Sentinels?oldid=91667"
Community content is available under CC-BY-SA unless otherwise noted.