Skyrockets villainous rampage was short-lived. Not much of the character is known beyond that.

An unnamed scientist gave Skyrocket his powers and equipment, and together the two planned robberies for Skyrocket to commit. They used an abandoned house as a base, not realizing that Batman’s old enemy The Riddler was also hiding out there. The Riddler overheard their schemes and, considering this new villain a competitor, decided to tip off the Super-Friends by giving them riddle-clues to Skyrocket’s crimes. But Riddler’s psychological compulsion forced him to commit crimes of his own that *also* fit the clues. The Super-Friends had a tough time trying to track down these two wily criminals simultaneously, but eventually both were captured.[1]

Skyrocket is a brash and confident thief, with no qualms at all about taking on the likes of Superman and Wonder Woman in the course of his crimes. His m.o. is pretty simple : swoop in at great speed, grab the loot, and swoop back out again (shooting off his “fireworks” as needed to dissuade any pursuers).

His suit has fins on the back, legs, and helmet, and a white rocket emblem on the chest.
Small rocket tubes are strapped to his forearms and shins. 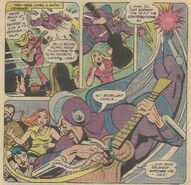 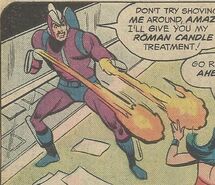 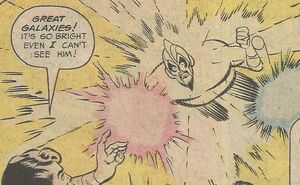 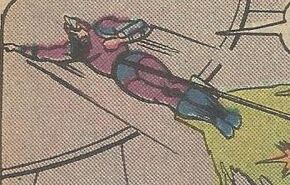 Retrieved from "https://superfriends.fandom.com/wiki/Skyrocket?oldid=62730"
Community content is available under CC-BY-SA unless otherwise noted.