Sherry (or Sherri) Alberoni (born December 4, 1946 in Cleveland, Ohio) is an American actress and voice artist.

Alberoni got her start as a Mouseketeer on the weekday ABC television program The Mickey Mouse Club. As an adult, she became a voice artist for Hanna-Barbera Productions. Alberoni provided voices for numerous incidental characters in series such as Scooby-Doo, Where Are You! (Scooby-Doo’s first incarnation, 1969-1971) and Jeannie. She is also known as the voice of the nasty rich-girl Alexandra Cabot from the 1970, Josie and the Pussycats.

Sherry Alberoni as a Mouseketeer 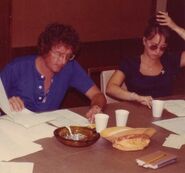 Retrieved from "https://superfriends.fandom.com/wiki/Sherry_Alberoni?oldid=78008"
Community content is available under CC-BY-SA unless otherwise noted.