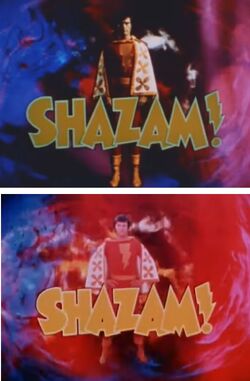 Shazam! was Filmations first live-action television series that ran from 1974 to 1976.

The show spawned a spin-off, The Secrets of Isis, and in 1975 the two paired up together, becoming The Shazam/Isis Hour, which dealt with the remastering process.

In 2019, this show was remastered and the moral segments that were previously thought lost were found once again. It became available to stream on DC Universe, along with the special Restoring Shazam!.

The series featured young Billy Batson (Michael Gray) and his elderly guardian, known only as Mentor (Les Tremayne). Together they traveled across 1970's United States[1] in an RV, righting wrongs and helping those in need. Billy is on vacation from his job at the News building,[2] so as to be mentored to be a superhero. When trouble arose, Billy exited the RV, spoke the magic word "Shazam". He was instantly struck by a magic lightning-bolt and transformed via animation and special effects into the World's Mightiest Mortal, Captain Marvel.

The series departed greatly from accepted comic book canon, in that Billy never interacted directly with the wizard Shazam. In fact, Shazam was not even included as a part of the series, and was only referenced as a power-name that Billy invoked to transform into Captain Marvel. Instead, he speaks to the six Elders, an analog to the six ancients who bequeath their powers to Batson in the comic books. These six Elders are: Solomon, Hercules, Atlas, Zeus, Achilles, and Mercury. The only member of the Elders ever referenced by name was Solomon, who usually spoke to Billy through a red, glowing device mounted on the console of Mentor's RV. When the Elders appeared before Billy, they are in a vast cavern taking the form of a mystic montage of animated characters, rather than actual actors.

Violence was downplayed and there were no supervillains, nor did any other members of the Marvel Family appear. Billy, as both himself and as Captain Marvel, would help people out of difficult situations of their own making. As in many Filmation shows and cartoons, moral messages were contained within each episode, crystallized at the end of each episode either by Billy learning a new moral lesson from either Mentor or his empowering elders.

Each episode began with the following narration, accompanied by a mix of live action and animation:

Retrieved from "https://superfriends.fandom.com/wiki/Shazam!?oldid=89644"
Community content is available under CC-BY-SA unless otherwise noted.